Update 7:45pm: not everyone lost money in this post-modern, gammafied pump and dump which culminated with BBBY losing more than half of its value today: according to Bloomberg calculations Billionaire Ryan Cohen – who apparently was not rich enough – pocketed at least a $68 million profit from the sale of his stake in Bed Bath & Beyond, scoring a 56% gain on an investment he held for roughly seven months. Some math:

Cohen’s RC Ventures paid $121.2 million between mid-January and early March to acquire 7.78 million shares and options to purchase another 1.67 million shares, a regulatory filing shows. He unloaded all of them this week for a combined $189.3 million, according to a filing on Thursday after the US market close.

On the other hand, retail traders – especially those who were late to the trade – and who poured millions of dollars into the insolvent retailer’s stock, may be just starting to feel the pain.

According to Vanda research, retail traders poured a torrent of cash into Bed Bath & Beyond’s shares in recent weeks, even with the company’s financial situation collapsing. They bought $58.2 million of the stock on Wednesday, a day after snapping up a record $73.2 million. Net purchases over three weeks totaled $229.1 million an amount which just may wake the Suck Elon’s Cock commission from its perpetual hibernation.

The worst part for the Reddit crowd in this entire fiasco: It was billionaire Cohen’s very involvement in the stock that fueled their enthusiasm. The price at one point this week more than quadrupled from a recent low in July, with at least some pointing to a disclosure that showed the GameStop chairman still was holding onto his stake, which at that point exceeded 10% of the firm. It included call options that would only be in-the-money if the stock continued to soar.

It did not, because – drumroll – Cohen used that disclosure to spark a meltup in the stock which he then sold into.

The rest is now known.

We tried – we really tried – to warn millions of retail traders, from the reddit apes, to the mom and pops, to the basement dwellers, to the Robinhood fanatics – that their idol “Papa Ryan” Cohen, aka “Diamondhands” was about to rugpull them.

Instead, our warning was met with idiotic accusations of being everything from Citadel shills (even though they threatened to sue us for correctly accusing them of frontrunning retail investors), to being Wall Street sellouts.

Well less than 24 hours later we were proven right when Papa Ryan dumped his entire 9.5 million share-equivalent stake in BBBY just one day after the 144 filing…

… or rather before, because what is most remarkable about the one-day liquidation is that RC Ventures, Ryan Cohen’s market manipulation fund, was actually dumping the shares on Wednesday morning, long before he even filed the 13G.

Now that there is no pied piper to lead the rats apes to their destruction, BBBY stock is crashing… 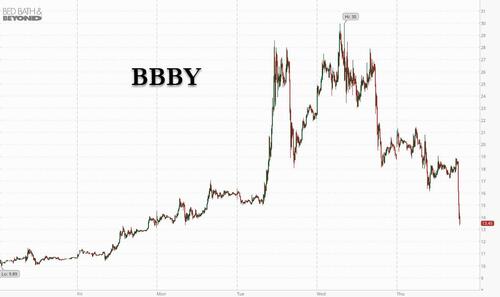 … and dragging GME – where Papa Cohen has yet to sell – with it.

As for Cohen, we can’t help but be touched by his nobility and generosity, when just a few weeks ago he was so concerned about bagholders…

… before himself leaving thousands of bagholders nursing millions of losses.

We can only hope that the outcry from this latest glaring manipulation will finally prompt the absolute morons at the SEC to finally do something about this kind of manipulative, management-driven gamma squeeze…

… but with the unprecedented amount of corruption in this administration, we are not holding our breath.