After sparking a border crisis by effectively announcing the United States is now a sanctuary country, the Biden administration is scrambling to put the genie back in the bottle. 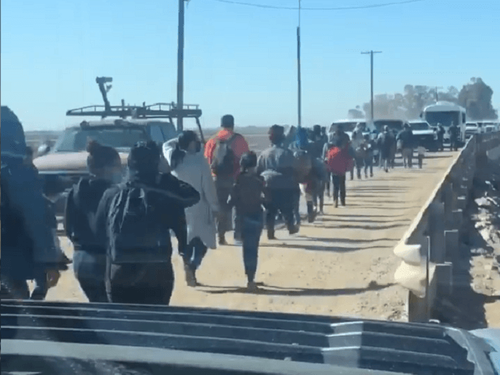 On Tuesday, President Biden told ABC News‘ George Stephanopolous that his message to migrants is “Don’t come over” – after sending the opposite message in January and February – issuing a flurry of Executive Orders, including a pathway to citizenship for roughly 11 million illegal immigrants, boosting green cards for skilled workers and their families, expanding refugee and asylum admissions, and generally touting a reversal of Trump’s strong border policies.

When ABC's Martha Raddatz asks: “did you come here because Joe Biden was elected president,” a migrant answers: “basically”pic.twitter.com/k1dxTaYDG6

The resulting flood of migrants has left over 13,000 children sitting in the so-called ‘cages’ that the MSM derided Trump over (which the Obama-Biden administration built), while the Biden administration is prohibiting the press from observing or reporting on immigrant detention centers.

Getty Images correspondent John Moore alleged there is a lack of transparency along the border. Last week, the Department of Homeland Security (DHS) stated that Secretary Alejandro Mayorkas’ trip to the border, including El Paso, Texas, “will be closed to press due to privacy and COVID-19 precautions.” –Epoch Times

Now, the Biden administration is acting as though they didn’t just stoke a massive influx of migrants by effectively inviting them into the country.

“The border is closed” – Biden Homeland Security Secretary Alejandro Mayorkas told NBC’s “Meet the Press” with a straight face, adding that families and single adults are being expelled, but not children who cross the border alone.

If you’ll recall, Trump was called a racist for ‘closing’ the border and building new sections of wall.

“We will not expel into the Mexican desert, for example, three orphan children whom I saw over the last two weeks. We just won’t do that,” said Mayorkas, who added that it would take time to build “orderly systems” because “the entire system was dismantled” by the Trump administration, he later said on “Fox News Sunday.”

“Meet the Press” host Chuck Todd actually pushed back – asking “how can you say the border is closed?”

Todd began the discussion by reading a quote from Democratic Texas Rep. Vicente Gonzalez criticizing President Joe Biden’s administration for incentivizing people to cross the border illegally. He then asked Mayorkas if he was concerned a “market efficiency” has been created where people decide their children have a shot to get into the U.S. if they attempt to go alone. –Daily Caller

“Our message has been straightforward and simple, and it’s true. The border is closed. We are expelling families, we are expelling single adults, and we’ve made a decision that we will not expel young, vulnerable children,” Mayorkas replied. “I think we are executing on our plans and, quite frankly, when we are finished doing so, the American public will look back on this and say we’ve secured our border and we upheld our values and our principles as a nation.”

Would have been interesting if Joe Biden had campaigned in Democratic primaries on an elect-me-and-I'll-close-the-border platform. https://t.co/8wZcNtur5V

“How can you say the border is closed if there is this, what some would look at as a loophole,” Todd pushed back. “I understand on humanitarian grounds, but if the goal is to get these asylum seekers to seek the asylum in home country, Honduras, Guatemala, El Salvador, for instance, how do you get them to do that if our policy is to let them in at the border?”

Mayorkas deflected, saying that the Biden administration had “short, medium, and long-term” plans for immigration – without explaining what they are.

So – if we’re to play by the left’s new rules which decree that border closures are racist, what does that make Biden?