Wondering why productivity is down? Think about the new phenomenon called quiet quitting… 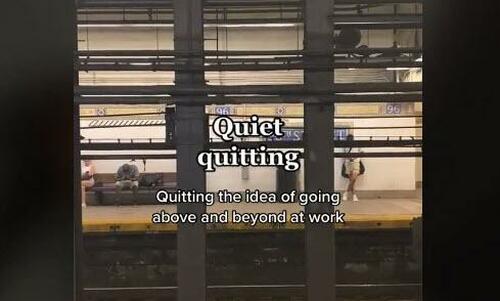 A 17 second TikTok video on Quiet Quitting has amassed over 480,000 likes. I played it and thought “really?”

Zoomers and the Extra Mile

The Wall Street Journal comments If Your Co-Workers Are ‘Quiet Quitting,’ Here’s What That Means

The phrase is generating millions of views on TikTok as some young professionals reject the idea of going above and beyond in their careers, labeling their lesser enthusiasm a form of “quitting.”

Of course, every generation enters the workforce and quickly realizes that having a job isn’t all fun and games.

The difference now is that this group has TikTok and hashtags to emote. And these 20-somethings joined the working world during the Covid-19 pandemic, with all of its dislocating effects, including blurred boundaries between work and life. Many workers say they feel they have power to push back in the current strong labor market. Recent data from Gallup shows employee engagement is declining.

Across generations, U.S. employee engagement is falling, according to survey data from Gallup, but Gen Z and younger millennials, born in 1989 and after, reported the lowest engagement of all during the first quarter at 31%.

Jim Harter, chief scientist for Gallup’s workplace and well-being research, said workers’ descriptions of “quiet quitting” align with a large group of survey respondents that he classifies as “not engaged”—those who will show up to work and do the minimum required but not much else. More than half of workers surveyed by Gallup who were born after 1989—54%—fall into this category.

Americans Are Breaking Up With Their Work Friends

Also consider Americans Are Breaking Up With Their Work Friends

In the months before he left his last job in 2020, Michael Trotter came to dread an end-of-day question from colleagues: Do you want to grab a drink?

“I don’t want to put in eight, nine, 10 hours and go out and have a beer—and talk about work for another four hours,” says Mr. Trotter, a 53-year-old database administrator in Cupertino, Calif.

In a recent survey of nearly 1,000 U.S. employees, relationships with co-workers tied with recognition as the least important factors in job satisfaction. (Compensation and work-life balance ranked as the most important of the 14 choices, according to online software marketplace Capterra, which conducted the survey.) Nearly two-thirds of those who had experienced high turnover at their companies said it had become less worthwhile for them to socialize and get to know colleagues.

This is all so different than when I was in corporate America. All I wanted to talk about after work, was work.

If a project required weekend work, guess what?

I had not even heard the term “Quiet Quitting” until today.

Yet, in many ways it seems all so understandable. The average person making the average wage cannot afford the average house.

Marriage, kids, houses, who can afford them?

Is it strange then that priorities have shifted from getting ahead to free time?

On August 9, I commented Real Output Per Hour Improves From Second Worst on Record to Simply Miserable

Perhaps productivity was really always overstated, not really capturing all the hours Boomers and Gen-Xers  put in off the clock, unpaid.

Regardless, it rates to get worse as 20 million workers at retirement age will retire within a few years.