An honest reading of the transcript, however, reveals Nunes said no such thing.

This is 100% false. What Nunes actually said during the interview was he just donated plasma because he recently learned he had COVID-19 antibodies.

It was crystal clear in the interview.

There is *nothing* these media vultures won’t lie about. Insane. https://t.co/PgGMSrlBu4

What Nunes did test positive for were COVID-19 antibodies, meaning he must have come in contact with the virus at some point, but Nunes never said he had ever tested positive nor received an official diagnosis with the pandemic disease.

“I actually tested positive for the COVID antibodies,” Nunes said. “When that happened, the doctor said, ‘hey, you need to give blood plasma right away.’”

Nunes continued, stressing the importance for those known to possess COVID-19 antibodies to donate their blood plasma to help treat virus-stricken patients.

“They’re short. They’re out of blood plasma for COVID patients,” Nunes said. “This is really important because when somebody gets super sick and they go into the hospital, the plasma can be really effective to help save someone’s life.” 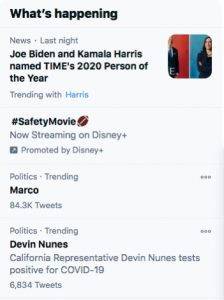 Rep. Devin Nunes said Friday that he had tested positive for COVID-19.

This is the same guy who said in April that “all American politicians and the media need to stop looking at death counters.” https://t.co/7sUoh9ssN5