House Speaker Nancy Pelosi greeted the unveiling of a Democrat-backed bill to pack the Supreme Court with apparent disdain on Thursday when she said she would not bring the bill to a vote on the floor, adding that the issue of court packing needs to be “studied further”.

As we already know, President Biden agrees, which is why he signed an executive order creating a commission to study court-packing earlier this month. But just because Pelosi is expressing opposition to the bill doesn’t mean she opposes the idea of court packing. SCOTUS Justice Stephen Breyer has warned that appearing to pack the court for political reasons would undermine public confidence in the courts, and Democrats are well aware that public opinion polls show a majority of Americans oppose packing the courts.

Still, Pelosi believes Court Packing should be “considered” and supports Biden’s efforts to study the issue, before noting that changing the size of the court “has been done before” and that changes in the US economy “might necessitate such a thing.”

Of course, this talk about the changing nature of the US economy is just more academic nonsense, as the Dems pursue their strategy of packaging the ‘court packing’ bill in layers of academic rigor and consensus fact-finding.

For the record, President Biden thinks court-packing is a “bone-headed idea”. This will likely remain his official position until Dems decide exactly how they plan to move forward on one of the key progressive policy positions, which hopes to “undo the damage” allegedly done by President Trump.

During the campaign, President Joe Biden frequently evaded questions about “court packing”, the practice of using a Democratically controlled Congress to try and expand the number of judges on the Supreme Court. These “deflections” attracted plenty of scrutiny in the press, not that we ever believed for a second that, once in power (and with a Democratic majority in Congress) Biden wouldn’t move to rip out the most important piece of President Trump’s legacy. 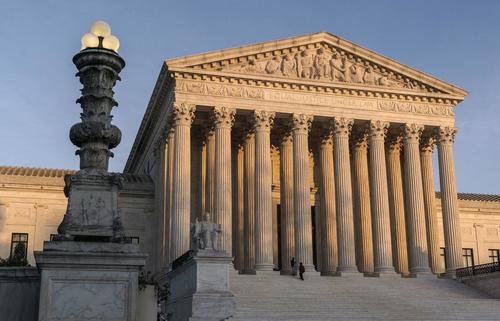 Well, it appears that day has finally arrived. Because last night, the first leaked reports landed warning that Democrats in Congress would move to introduce new legislation Thursday to expand SCOTUS from 9 to 13 justices, according to NBC News.

The bill has won wide support among progressives, who have made packing the court a key policy goal in the Biden area.

The move isn’t exactly a surprise: last week, Biden announced the formation of a commission of liberals and conservatives to study the structure of the Supreme Court, including the number of justices and the length of their service.

Congressional Democrats will introduce legislation Thursday to expand the Supreme Court from nine to 13 justices, joining progressive activists pushing to transform the court.

The move intensifies a high-stakes ideological fight over the future of the court after President Donald Trump and Republicans appointed three conservative justices in four years, including one who was confirmed days before the 2020 election.

The Democratic bill is led by Sen. Ed Markey of Massachusetts and Rep. Jerry Nadler of New York, the chair of the House Judiciary Committee. It is co-sponsored by Reps. Hank Johnson of Georgia and Mondaire Jones of New York.

The Supreme Court can be expanded by an act of Congress, but the legislation is highly unlikely to become law in the near future given Democrats’ slim majorities, which include scores of lawmakers who are not on board with the idea. President Joe Biden has said he is “not a fan” of packing the court.

To be sure, as NBC News points out, the legislation has little hope of passing – at least, not in its current form. The Dems still must contend with West Virginia’s Joe Manchin, whose “moderate” tendencies complicate the Dems’ barely-there majority. Still, the legislation represents “an undercurrent of progressive fury” that has lingered since the GOP denied Obama’s nominee, Merrick Garland, a hearing back in 2016.

And progressives were certainly eager to praise the initiative in their comments to the press.

“This bill marks a new era where Democrats finally stop conceding the Supreme Court to Republicans,” said Brian Fallon, a former Senate Democratic leadership aide and a co-founder of Demand Justice, who described the court as “broken and in need of reform.”

“Our task now is to build a grassroots movement that puts pressure on every Democrat in Congress to support this legislation because it is the only way to restore balance to the court and protect our democracy,” he said.

The size of the Supreme Court, which has fluctuated since it was established in 1789, has remained at nine since 1869. The bill’s sponsors,  who intend to announce the introduction of the bill outside the Supreme Court building on Thursday, will be joined by progressive activists Aaron Belkin (who leads Take Back the Court; Chris Kang, a co-founder and chief counsel of Demand Justice) and Meagan Hatcher-Mays (of the group Indivisible).

Now for the big question: why are Democrats bothering with this bill if it likely won’t pass? For this, the Hill looks back to the days of FDR, who saw a similar court-packing push stymied in Congress – but not before it helped him bring those pesky conservative justices into line. “It succeeded in intimidating the Supreme Court into a retreat from its protection of economic liberty against progressive aspirations to regulate American industry. As debate raged over the failed court-packing proposal, the court executed its “switch in time that saved nine,” the notorious volte-face in which previously untenable regulatory regimes were suddenly green-lighted under the guise of promoting “the health, safety, morals and welfare of the people”…”