Several FBI whistleblowers say that the agency’s probe into Hunter Biden was internally sabotaged during the 2020 election in order to derail the investigation, after agents wrongfully deemed verified evidence as “disinformation” to ignore.

According to Sen. Chuck Grassley (R-IA), agents investigating Hunter “opened an assessment which was used by an FBI headquarters team to improperly discredit negative Hunter Biden information as disinformation and caused investigative activity to cease,” adding that his office received “a significant number of protected communications from highly credible whistleblowers” regarding the investigation.

Grassley added that “verified and verifiable derogatory information on Hunter Biden was falsely labeled as disinformation,” according to the Washington Examiner.

FBI supervisory intelligence agent Brian Auten opened in August 2020 the assessment that was later used by the agency, according to the disclosures. One of the whistleblowers claimed the FBI assistant special agent in charge of the Washington field office, Timothy Thibault, shut down a line of inquiry into Hunter Biden in October 2020 despite some of the details being known to be true at the time.

A whistleblower also said Thibault “ordered closed” an “avenue of additional derogatory Hunter Biden reporting,” according to Grassley, even though “all of the reporting was either verified or verifiable via criminal search warrants.” The senator said Thibault “ordered the matter closed without providing a valid reason as required” and that FBI officials “subsequently attempted to improperly mark the matter in FBI systems so that it could not be opened in the future,” according to the disclosures.

The whistleblowers say investigators from FBI headquarters were “in communication with FBI agents responsible for the Hunter Biden information targeted by Mr. Auten’s assessment,” and that their findings on whether the claims were in fact disinformation were placed “in a restricted access sub-file” in September 2020, according to Grassley, who added that the disclosures “appear to indicate that there was a scheme in place among certain FBI officials to undermine derogatory information connected to Hunter Biden by falsely suggesting it was disinformation.” 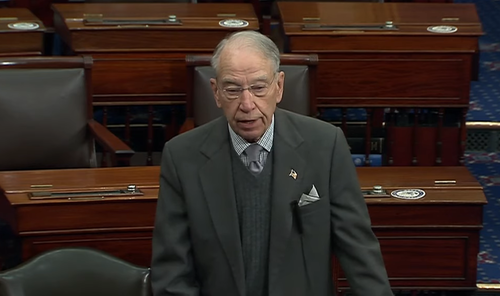 According to Grassley, the “volume and consistency” of the allegations regarding the handling of the Hunter Biden probe “substantiate their credibility.”

The assessment by Auten in August 2020 was opened the same month Grassley and Sen. Ron Johnson (R-WI) received a briefing from the FBI “that purportedly related to our Biden investigation and a briefing for which the contents were later leaked in order to paint the investigation in a false light,” Grassley said. The senator said Senate Democrats asked for a briefing in July 2020 “from the very same FBI HQ team that discredited the derogatory Hunter Biden information.”

The FBI inquiry into Hunter Biden reportedly began as a tax investigation, then expanded into a scrutiny of potential money-laundering and foreign lobbying; the DOJ has declined to hand over investigative details. -Washington Examiner

Thibault, the FBI agent who allegedly quashed the Hunter probe, may have violated the Hatch act in 2020 after making posts on social media which were critical of then-president Donald Trump and former AG William Barr.

Also notable – Hunter had the numbers of several FBI agents in his iCloud contacts.

Joe Biden, top Democrats, and virtually the entire mainstream media dismissed the Hunter Biden laptop story as Russian disinformation when bombshell allegations from the New York Post emerged weeks before the 2020 election. In March 2021, the Office of the Director of National Intelligence released a report claiming that figures tied to Russian intelligence promoted “misleading or unsubstantiated allegations” about Joe Biden.

Grassley to Garland and Wra… by Washington Examiner