Despite headlines discussing COVID ‘plateaus‘ and ‘dramatic declines‘ in the United States, the Biden administration is mulling whether to impose domestic travel restrictions over concerns that “coronavirus mutations are threatening to reverse hard-fought progress on the pandemic,” according to the Miami Herald.

Outbreaks of the new variants — including a highly contagious one first identified in the United Kingdom, as well as others from South Africa and Brazil that scientists worry can evade existing vaccines — have lent urgency to a review of potential travel restrictions within the United States, one federal official said.

Discussions in the administration over potential travel restrictions do not target a specific state but focus on how to prevent the spread of variants that appear to be surging in a number of states, including Florida and California. –Miami Herald

“There are active conversations about what could help mitigate spread here, but we have to follow the data and what’s going to work. We did this with South Africa, we did this with Brazil, because we got clear guidance,” said one White House official. “But we’re having conversations about anything that would help mitigate spread,” the official added regarding the discussions aimed at targeting the spread of the UK mutation in places like Florida – where over a third of all UK variant cases in the US have been identified.

Two federal officials made clear that no policy announcements are imminent, and that any travel restrictions would be undertaken in coordination with state and local governments.

“No decisions have been made, but we certainly are having conversations across government,” said the White House official, adding “This is a war and we’re at battle with the virus. War is messy and unpredictable, and all options are on the table.”

The potential action comes after Biden directed the CDC, the Department of Homeland Security and the Department of Transportation to “promptly” create a list of recommendations on “how their respective agencies may impose additional public health measures for domestic travel.”

Meanwhile, Transportation Secretary Pete Buttigieg, the second gay man in US history to hold a cabinet position, has been examining whether to require COVID-19 testing for domestic flights – a suggestion that has drawn criticism from airline execs as “a horrible idea.”

“We had been pushing the use of a mask mandate, so we were very pleased to see the Biden administration put an executive order in place requiring masks in general spaces and in the airspace. That’s absolutely critical,” said Tori Emerson Barnes, executive vice president of public affairs and policy at the U.S. Travel Association who has spoken with the Biden administration on the matter. “We have some concerns around the idea of a domestic testing requirement, because not only would it require a 42% increase in the testing capacity nationwide, but it’s really not scalable, feasible or effective.”

The Herald notes that “COVID-19 cases in Florida have declined in recent weeks,” however the UK variant has “spread rapidly in the state during that time,” and now accounts for up to 15% of new cases in the state, according to estimates from researchers modeling the variant’s spread across the country.

Florida Governor Ron DeSantis “opposes travel restrictions and does not believe diagnostic tests should be a prerequisite to domestic air travel,” acording to spokeswoman Meredith Beatrice, while Senator Marco Rubio (R-FL) wrote Biden to warn that travel restrictions on the state would be “reckless and economically harmful.”

“Instituting a travel ban, or any restriction of movement between the states, would be an outrageous, authoritarian move that has no basis in law or science,” wrote Rubio.

Speaking of science, Bank of America just noted that COVID-19 hospitalizations have “declined dramatically” and are down 40% from the peak which occurred on January 5, which they described as “a rapid turn in the crisis.”

The decrease is broad-based (all 50 states+DC saw no increases over the past week without exception). The weekly percentage change in US Covid-19 hospitalized is consistent with the largest declines seen during the Coronavirus crisis.

Moreover the 7-day test positivity rate has declined to 6.9% from the 13.6% peak on January 8th. Since  hospitalizations are lagged relative to time
of infection the US Corona outbreaks peaked back in the second half of December. -Bank of America 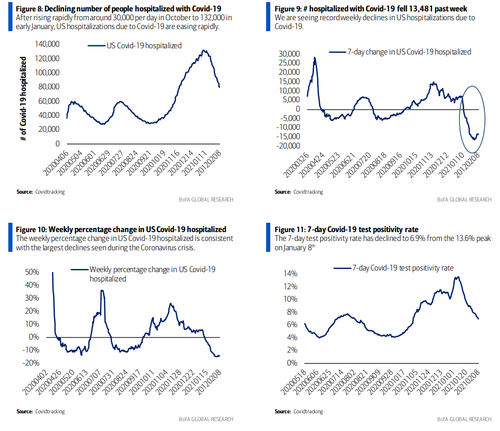 According to Robert Bednarczyk, a public health expert and assistant professor at Emory University’s Rollins School of Public Health, nobody knows whether travel restrictions will help, and implementing then now could amount to “closing the barn door once the horse is out.”

“With only a small fraction of samples tested for specific mutations, this is likely underestimating the amount of spread,” Bednarczyk added, noting that the UK’s B.1.1.7 variant has already spread to 34 other states despite the fact that it’s more concentrated in California and Florida. “In addition to what we’ve been asking of the population — masks, distancing, avoiding large gatherings — I think people should consider avoiding travel, especially to tourist destinations where there’s a greater chance of disease spread to individuals who can take it to more places.”