Several weeks ago we reported that amid Europe’s mindblowing gas and electricity prices, Deutsche Bank predicted that a growing number of German households will be using firewood for heating, a forecast which appears to have become self-fulfilling as German google searches for firewood (“brennholz”) had since exploded off the charts: 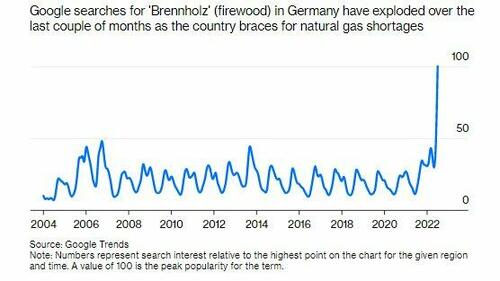 But while Germans are still “searching” merely in the virtual realm, for countless Poles the search is all too real.

According to Reuters, with Poland still basking in the late summer heat, hundreds of cars and trucks have already lined up at the Lubelski Wegiel Bogdanka coal mine, as householders fearful of winter shortages wait for days and nights to stock up on heating fuel ahead of the coming cold winter in queues reminiscent of communist times.

Artur, 57, a pensioner, drove up from Swidnik, some 30 km (18 miles) from the mine in eastern Poland on Tuesday, hoping to buy several tonnes of coal for himself and his family.

“Toilets were put up today, but there’s no running water,” he said, after three nights of sleeping in his small red hatchback in a crawling queue of trucks, tractors towing trailers and private cars. “This is beyond imagination, people are sleeping in their cars. I remember the communist times but it didn’t cross my mind that we could return to something even worse.”

In Poland, where coal is king, dozens are lining up at the Lubelski Wegiel Bogdanka coal mine, waiting for days and nights to stock up on heating fuel. Read more: https://t.co/jVGwSEfLam pic.twitter.com/zZV3vtzEQk

Artur’s household is one of the nearly 4 million in Poland that rely on coal for heating (granted, these households are probably in better shape than the ones relying on nat gas whose price is rising by 10-20% every day and is now almost literally in the stratosphere) and now face shortages and price hikes, after Poland and the European Union imposed an embargo on Russian coal following Moscow’s invasion of Ukraine in February. Poland banned purchases with an immediate effect in April, while the bloc mandated fading them out by August.

While Poland produces over 50 million tonnes from its own mines every year, imported coal, much of it from Russia, is a household staple because of competitive prices and the fact that Russian coal is sold in lumps more suitable for home use.

Soaring demand has forced Bogdanka and other state-controlled mines to ration sales or offer the fuel to individual buyers via online platforms, in limited amounts. Artur, who did not want to give his full name, said he had collected paperwork from his extended family in the hope of picking up all their fuel allocations at once.

The mine planned to sell fuel for some 250 households on Friday and would continue sales over the weekend to cut waiting times, Dorota Choma, a spokeswoman for the Bogdanka mine told Reuters.  The limits are in place to prevent hoarding and profiteering on the black market, or even selling spots in the queue, Choma said.

Like all Polish coal mines, Bogdanka typically sells most of the coal it produces to power plants. Last year, it sold less than 1% of its output to individual clients so lacks the logistics to sell fuel directly to retail buyers.

“But the main reason for the shortages is the embargo that went into immediate effect. It turned the market upside down,” he told Reuters. A spokesman for the Weglokoks, a state-owned coal trader tasked by the government to boost imports from other countries declined to comment, while the climate ministry was not available for comment. Government officials have repeatedly said Poland would have enough fuel to meet demand.

In recent years, Poland has been the most vocal critic of EU climate policy set by a petulant Scandinavian teenager, and a staunch defender of coal that generates as much as 80% of its electricity. But coal output has steadily declined as the cost of mining at deeper levels increases. Coal consumption has held mostly steady, prompting a gradual rise in imports. In 2021, Poland imported 12 million tonnes of coal, of which 8 million tonnes came from Russia and used by households and small heating plants.

In July, Poland ordered two state-controlled companies to import several million tons of the fuel from other sources including Indonesia, Colombia and Africa, and introduced subsidies for homeowners facing a doubling or tripling of coal prices from last winter.

“As much as 60% of those that use coal for heating may be affected by energy poverty,” Horbacz said.

Back at Bogdanka, Piotr Maciejewski, 61, a local farmer who joined the queue on Tuesday, said he was prepared for a long wait. “My tractor stays in line, I’m going home to get some sleep,” he said.