Shares in DWAC had been hovering around $9 before Wednesday’s announcement, before rising to $52 on Thursday and closing at $45.50. An incredible half a billion shares changed hands during regular market hours. Momentum continued on Friday despite five halts, as the stock opened at $118, hit a high of $175 despite momentum-breaking halts, only to close at $94.20 at the end of the day (dropping to nearly $80 after hours). 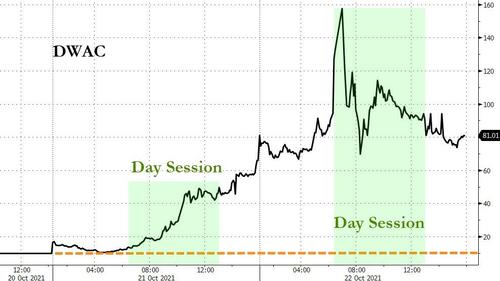 Wow, $DWAC traded $13b yesterday, that has to blow away the record for a SPAC. It was #2 most traded stock. Only $TSLA saw move dollar volume. pic.twitter.com/GxxRXioKMg

And according to Bloomberg, citing SEC filings, it appears that Trump will own more than 50% of the combined company. Assuming that the company’s initial enterprise value was $875 million (based on figures from press releases) was calculated at $10 per share offering price and the $293 million Digital World has in trust, owners of the SPAC will receive around 42% of the combined company, leaving 58% for Trump – a stake worth nearly $4.8 billion based on Friday’s close. For reference, Twitter is worth nearly $50 billion.

“At its current value, that would make him the richest he’s ever been, up from his estimated net worth now of $2.5 billion, according to the Bloomberg Billionaires Index,” according to the report.

The on-paper gains, should they hold, more than make up for the $500 million hit Trump took to his net worth since becoming President according to the report.

There are many reasons to be skeptical of the valuation. It will be months before the new venture publicly releases its first product, a social-media platform called Truth Social. And there are already technical issues. On Thursday, the Truth Social page was hacked to make it appear that Trump shared a photo of a defecating pig.

It’s also unclear how Trump plans to build a social-media platform on the scale of Twitter over the next few months, let alone a streaming service, which is the next phase of Trump Media’s plans, according to the press release announcing the company. That statement was light on numbers even by SPAC standards.

“We have no financials. We have no business plan. We don’t know how they got to the valuation. We have no information,” said Kristi Marvin, CEO of research firm SPAC Insider. “That’s the fundamental problem.”

Trump’s new business plans to include a potential “tech stack” which would compete with cloud offerings from Google and Amazon, according to a presentation on Trump Media’s website.

That said, Bloomberg takes a further shot at Trump – noting that Digital World’s board is ‘light on members with media experience.’

If Trump’s new venture provides a conservative-friendly Twitter competitor that includes cloud hosting services, and perhaps a digital ad platform, we can only imagine how high valuations will go if it gains legitimate traction going into the 2022 midterms and beyond.