During a hearing on his confirmation to the U.S. Supreme Court, Clarence Thomas famously described Senate Democrats’ handling of his nomination as a “high-tech lynching.”

The chairman of the Senate Judiciary Committee, presiding over the confirmation, was Joe Biden. And 30 years later, as the Supreme Court deliberates over an abortion case that could overturn Roe v. Wade, the political left has launched another attack on Thomas, who has made it clear he believes the landmark 1973 ruling is unconstitutional.

This time, the attack centers on the political views and activism of his wife, Virginia “Ginni” Thomas.

Establishment media have seized on a lengthy exposé in The New Yorker by investigative reporter Jane Mayer titled “Is Ginni Thomas a Threat to the Supreme Court?”

The piece is subtitled “Behind closed doors, Justice Clarence Thomas’s wife is working with many groups directly involved in controversial cases before the Court.”

Mayer doesn’t hide her disdain for Ginni Thomas’s conservative political views, labeling them “far-right” and noting the justice’s wife believes fraud affected the outcome of the 2020 presidential election. And Democrats long have made it clear they think Clarence Thomas’s judicial philosophy makes him the wrong kind of black man to fulfill their goal of diversity on the court.

But Mayer sets out to argue that Clarence Thomas is violating fundamental rules of judicial ethics, while acknowledging that Supreme Court justices are not bound by the rules regarding conflicts of interest to which lower-court federal judges must adhere.

Mayer emphasizes that federal judges must recuse themselves from cases in which their spouse has a financial interest or some other kind of concrete interest. And they must recuse if there is the appearance of a conflict of interest, based on the premise that it could harm public trust in the judiciary.

Attorney Kelly Shackelford, who is quoted in Mayer’s article, told WND on Friday he sees the charges against the Thomases as an act of “desperation” and “totally baseless, if you look at the law and how we do things.”

“To anybody who knows and understands the law, it’s embarrassingly ignorant,” he said.

“But they do the articles for people who are not lawyers and don’t know what the ethical rules are,” added Shackelford, who called the growing campaign a “smear.”

Shackelford, the CEO of the Texas-based nonprofit legal advocacy group First Liberty Institute, has argued before the Supreme Court many times, and his group has had approximately one case before the court each year since 1997.

He said that while the Supreme Court is not subject to the conflict of interest rules, he believes the court follows them anyway.

“All these articles that they have been doing, you will notice that (in the instances cited) no one in a lower court would have been required to recuse themselves,” Shackelford told WND.

“They are saying things like, ‘Well, your wife went out and spoke on something, and therefore you shouldn’t deal with topics in that area,'” he said. “Nobody recuses for that.”

What is prohibited by judicial rules of ethics, Shackelford emphasized, is a judge ruling on cases in which he or she has a clear financial interest – such as owning stock – or if the spouse is arguing before the court.

“But they’re trying to take it to a place where it would never apply to any other judge,” he said. “If you took the approach that they want, you couldn’t practice law in most small communities where people all know each other.”

A sampling of reports that followed The New Yorker’s story:

Not on the docket
The New Yorker’s Mayer points out that Shackelford served with Ginni Thomas on the board of a conservative group called CNPAction and the steering committee of Save our Country Coalition, which opposes COVID-19 mandates as “unconstitutional power grabs.” And in January, Mayer wrote, “to the surprise of many observers, the Court agreed to hear a case in which First Liberty is defending a football coach at a public high school in Washington State who was fired for kneeling and praying on the fifty-yard line immediately after games.” 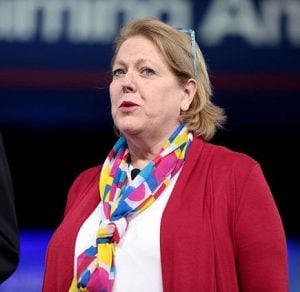 ABC News reported Ginni Thomas “sits on the advisory board of a group opposing affirmative action that filed a Supreme Court amicus brief in cases the justices recently agreed to take up.”

And she “has also been highly critical in public of the congressional committee investigating the Jan. 6 attack, whose business has also come before the court.”

Ginni Thomas, meanwhile, has not been named in any case on the court’s docket.

And Shackelford noted that a federal appeals court judge, Stephen Reinhardt – a “liberal icon” on the 9th Circuit – declined to recuse himself from a same-sex marriage case in 2011 in which his wife had filed a friend-of-the-court brief as an ACLU leader.

Reinhardt argued at the time that his wife’s “views regarding issues of public significance are her own.”

In 2016, the ACLU named Georgetown Law School Professor David Cole as its new legal director, posing “recusal issues” for his wife, Judge Nina Pillard of the U.S. Court of Appeals for the D.C. Circuit, as Law.com reported at the time.

“All of these situations on the left are much worse than anything they’re trying to smear Ginni Thomas with, and nobody is recusing themselves for those things, because the rules would say you shouldn’t,” Shackelford said.

No ‘pledges or promises’
The late Associate Justice Antonin Scalia recused himself in 2003 in the so-called “one nation under God” case brought by atheist Michael Newdow. The 9th Circuit had agreed with Newdow that those four words in the Pledge of Allegiance recited by public school children violate the Establishment Clause of the First Amendment. When the case reached the high court, Newdow requested that Scalia disqualify himself because of public statements the justice had made about the case. Scalia did withdraw from the case. The rules don’t require a justice to explain any decision to recuse, but it’s believed that it was because Scalia referred to the case in a speech and a Q&A session at an event earlier that year sponsored by the Knights of Columbus.

Shackelford noted there is a basic judicial principle that judges are not allowed to make “pledges or promises” before they have seen a case.

When the landmark 2015 same-sex marriage case came before the high court, there were critics on the right who wanted Associate Justices Ruth Bader Ginsburg and Elena Kagan to recuse themselves because they both had performed same-sex marriage ceremonies.

“That’s one of those appearance questions,” said Shackelford, that boils down to whether or not the justices were making a public statement about a specific case.

In those instances, they were not, he concluded.

Shackelford argued that by the standard applied by the critics of the Thomases, the spouse of a justice “would almost have to be a recluse.”

“Because if you do anything, serve on a non-profit, speak to any issues, serve on anything, associate with people in the community, you would create all kinds of problems. But that’s not what the law says.”

‘Another round’
A former clerk for Clarence Thomas, Carrie Severino, told ABC News that there are “always attempts on the left to manufacture grounds to recuse conservative justices from cases.”

“This strikes me as just another round of those attempts,” said Severino, who is president of the conservative legal advocacy group Judicial Crisis Network.

Politico reported that recently released emails obtained by a watchdog group suggest close ties between the Thomases and Republican Gov. Ron DeSantis of Florida, who has challenged federal COVID mandates before the Supreme Court. One email indicated Justice Thomas had “been in contact with [DeSantis] on various things of late,” which Politico argued was an indication of “ex parte communication.” Judges are not permitted to talk privately with people who have business before their court unless the other litigants are present.

Shackelford said he doesn’t see any evidence of wrongdoing on the part of Justice Thomas in that instance.

“I think it’s a lot of hopeful thinking to get rid of a conservative justice that they don’t like,” he said.

“Justice Thomas is about as strong an advocate of the proper judicial role as there is, that he would never do that. And I don’t see any of the other justices ever doing that.”

‘We know what this is all about’
Clarence and Ginni Thomas are not speaking publicly about the latest campaign against them.

But the associate justice made it clear in an acclaimed 2020 documentary, “Created Equal: Clarence Thomas in His Own Words,” that he believed the attacks against him during the 1991 confirmation process ultimately were about one issue: abortion.

In the film, he was asked to reflect on the confirmation process overseen by Joe Biden.

“But it turned out that through all of that, ultimately the biggest impediment was the modern day liberal,” he says. “They were the ones who would discount all those things because they have one issue or because they have the power to caricature you.”

Thomas has strongly denied the allegations of Anita Hill that became the focus of the confirmation process.

“Do I have like stupid written on the back of my shirt? I mean come on. We know what this is all about,” Thomas says in “Created Equal.” “People should just tell the truth: ‘This is the wrong black guy; he has to be destroyed.’ Just say it. Then now we’re at least honest with each other.

“The idea was to get rid of me,” he says. “And then after I was there, it was to undermine me.”

The filmmakers, without naming Biden, ask Thomas to respond to the then-senator’s questions during the 1991 hearing concerning natural law.

“I have no idea what he was talking about,” Thomas says of Biden.

“I understood what he was trying to do. I didn’t really appreciate it,” he says. “‘Natural law’ was nothing more than a way of tricking me into talking about abortion.”

“Most of my opponents on the judiciary committee cared about only one thing,” Thomas says in the film. “How would I rule on abortion rights. You really didn’t matter and your life didn’t matter.