The fact that the annual Conservative Political Action Conference can take place in-person this year is a testament to the leadership of Florida Republican Gov. Ron DeSantis, who after absorbing the counsel of prominent epidemiologists, weighed the costs and benefits for the people of his state, and largely kept it open for business, worship and education amid the coronavirus pandemic.

While previous CPACs have been held in a suburb of the nation’s capital, DeSantis opened the 48th CPAC convention on Friday in Orlando, Florida, welcoming participants to “our oasis of freedom.”

“We are an oasis of freedom in a nation that’s suffering in many parts of the country from the yoke of oppressive lockdowns,” he said. “We look around our country and in far too many places we see schools closed, businesses shuttered and lives destroyed.”

In his speech, DeSantis also emphasized his state’s leadership in election integrity, combating Big Tech censorship and carving a new path for the party that leaves behind the “failed Republican establishment of yesteryear.”

DeSantis said Florida is leading in “protecting our vulnerable residents, saving the economy and safeguarding the freedom of our people.”

“In Florida, schools are open, every Floridian has a right to earn a living and all businesses have a right to operate,” he said.

“We are stronger as a state and much happier as a people because of this leadership.”

“Florida got it right, and the lockdown states got it wrong,” DeSantis said.

Last September, as WND reported, DeSantis held a virtual roundtable discussion with medical and health scientists from Harvard and Stanford who contended lockdowns were making the pandemic worse.

In his introduction of DeSantis, CPAC host Matt Schlapp noted that the state where the conference usually is held, Maryland, “decided to cancel us because they said this was unsafe.” As the leadership of the American Conservative Union, which Schlapp chairs, considered possible alternatives — looking at Tennessee, Texas and Georgia — they settled on Florida.

“Some of your colleagues get Emmys for acting,” Schlapp said to DeSantis, referring to New York Gov. Andrew Cuomo. “We’re happy to be in a state that has a governor that deserves the People’s Choice award.” 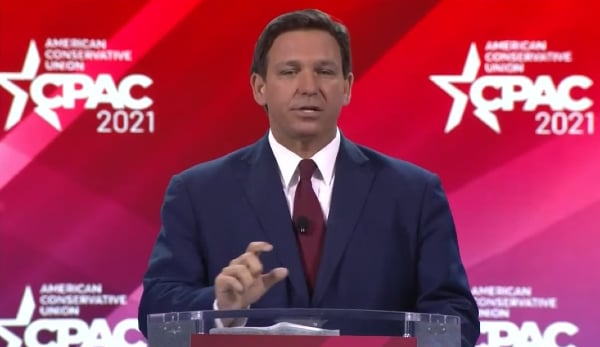 DeSantis touted Florida’s leadership on election integrity, noting the recovery from the stigma of the infamous “hanging chad” election of 2000.

Among his first actions when taking office in 2019 was removing the supervisors of elections in Broward and Palm Beach counties.

“Then when COVID hit, I rejected pressure to make hasty and ill-conceived changes to our election administration like mass mailing of unsolicited ballots,” he said.

The result was that by midnight on Nov. 3, Florida had counted, tabulated and reported 11 million votes.

Now, DeSantis said, Florida is leading on banning all forms of ballot harvesting and third-party political groups such as those funded by Facebook CEO Mark Zuckerberg “from interfering in the administration of our elections.” 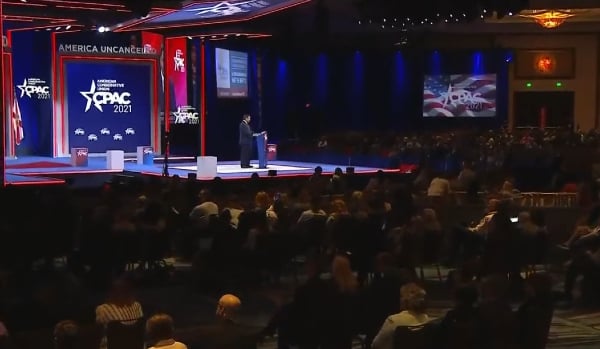 Resisting the ‘oligarchs of Silicon Valley’

DeSantis expects the state legislature to pass next month
“the most ambitious reforms yet proposed for combating political censorship and deplatforming, for preventing Big Tech from interfering in our elections and for safeguarding the privacy of your personal data.”

“In Florida, we are not going to let the terms of the debate be set by the oligarchs in Silicon Valley,” he said.

As WND reported the bill empowers citizens to take legal action and grants authority to the Florida attorney general to sue tech companies that violate the state’s Unfair and Deceptive Practices Act.

No going back to ‘failed’ GOP establishment

Looking at the big picture, DeSantis said that “what’s true in Florida is true for conservatives across the nation.”

“We cannot, we will not, go back to the days of the failed Republican establishment of yesteryear,” he said.

DeSantis said the Republican Party’s grassroots base rejects “open borders, “weakness in the face of the threat posed by China” and “military adventurism.”

The battles ahead, the governor continued, beginning to choke up, will “be made more difficult without one of the greatest field generals, my friend, Rush Limbaugh.”

“Rush displayed the courage of his convictions, time and time again,” he said after noting that he ordered flags in the state to fly at half-staff on Wednesday in Limbaugh’s honor. “Rush was one of the first to fight and win against cancel culture. Rush showed that fighting the left requires strength and that conservatism devoid of backbone is doomed to fail.”

He said Limbaugh “showed us” that at this moment in history, “standing for the right things comes at a cost.”

“You will be attacked, you will be smeared,” DeSantis said, “and you will even be canceled by the major organs of the political left.”

“And I’m not saying you don’t do any of that,” he said. “But the question is, when the klieg lights get hot, when the left comes after you, will you stay strong, or will you fold?”