Evergrande’s going down.  And it’s taking the life savings of countless good people down with it.

But while Evergrande’s going down.  Food prices are going up.  Moreover, they’re going up a lot.

If you recall, a decade ago food inflation triggered the Arab Spring uprisings across the Middle East and North Africa.  And food shortages were commonplace in Communist Romania in the 1980s.  That was before the country’s dictator Nicolae Ceausescu was overthrown, tried by a kangaroo court, lined up against a wall, and executed by firing squad on Christmas Day in 1989.

Rare is the revolution ignited by a populace with a full stomach.  Historically, surges against an oppressive regime are sparked by a steep and extended rise in food prices.

Leading up to the French Revolution, for example, famines were frequent.  In one instance, when Louis XVI’s clueless wife, Marie Antoinette, learned the peasants had no bread, she remarked, “let them eat cake.”

What followed were the Flour War riots.  Not long after that, Louis XVI’s head rolled off the guillotine chopping block.  Then things really got bad.

The Reign of Terror, led by the woke Jacobins, reigned over the land.  And the assignat currency, backed by land seized from the Catholic Church, blew up in a destructive episode of hyperinflation.  Before it was over Napoleon had channeled the discontent of a generation into a damaging misadventure to invade all of Europe.

If only there had been a little more bread to go around.

When adjusted for inflation and annualized, the cost of food is higher than nearly anytime in the past six decades, according to FAO data.  Alastair Smith, senior teaching fellow in global sustainable development at Warwick University in the United Kingdom, recently noted:

“Food is more expensive today than it has been for the vast majority of modern recorded history.”

With a little luck, these efforts will support lower prices in the short-term.  But these failed policies always make things worse in the long-term.  When government officials artificially set the price of something below what it costs to produce they guarantee that supply will disappear.

The Prime Minister of Romania, Florin Citu, is taking a more pragmatic approach.  He’s determined to avoid Ceausescu fate.  Thus, he wants to reduce his country’s dependence on imported processed foods.  He thinks this will reduce costs and narrow the trade deficit.

We wish him well.  When recently asked about the rising cost of a loaf of bread, he remarked: “I don’t eat bread.”

Does he eat cake?

Carbon dioxide, if you didn’t know, is used to stun chickens and pigs before slaughter, and for packaging and dry ice to keep meats frozen during delivery.  Without carbon dioxide, the food supply chain breaks.  Already, deliveries of frozen food to customers have been halted.

Who would have thought that carbon dioxide, something world improvers consider a poisonous greenhouse gas, was so valuable?

Here in the USA rising food prices have Whitehouse staffers working overtime too.  Their primary purpose at this point is to assign blame to someone else.

Government lockdowns and the resulting supply chain breaks and labor shortages are mysteriously overlooked as causes of rising food prices.  The creation of upwards of $4 trillion in printing press money is largely ignored…other than noting that government stimulus kept per capita demand for meat steady.

No, in the eyes of Whitehouse staffers the government can do no wrong.  Instead, these scholarly elites have come up with a real boogeyman for people to rail against.  In their very own Whitehouse blog – chock-full of bar charts, line graphs, and infographics – their culprit is explicitly identified.

According to President Biden’s underlings, rising food prices in America are the direct result of “pandemic profiteering” by the four large meat processing companies.  Here’s their rationale:

“Four large conglomerates overwhelmingly control meat supply chains, driving down earnings for farmers while driving up prices for consumers.  The meatpacking industry buys cattle, hogs, and chickens from farmers and ranchers, processes it, and then sells beef, pork, and poultry on to retailers like grocery stores.  The industry is highly consolidated, and serves as a key choke point in the supply chain.

Quite frankly, there’s no industry left that hasn’t been spoiled and besmirched by one fraud or another.  But no industry is more crooked than the U.S. government.  And like most policy reports outlining the case for ramping up government intervention, the argument is incomplete.

Do the authors know why the meat processing industry consolidated in the first place?  Do the authors really know that absent consolidation prices would be lower for consumers?

In truth, they care little about the answer to these questions.  What they care about is that consolidation in the meat processing industry makes a good story for why food prices are rising.  What’s more, this story provides justification for the government to spend gobs of money that isn’t theirs for the noble purpose of making the world a more comfortable and agreeable place.

Per the Whitehouse blog:

“As we restart the world’s largest economy and make great strides in the economic recovery, the Biden-Harris Administration is committed to restarting right for the American people—consumers and producers alike—by transforming the food system.  This is a pivotal moment of opportunity to build back a better food system that is fair, competitive, distributed, and resilient.”

Without question, anyone with half their marbles already knows how this story ends… 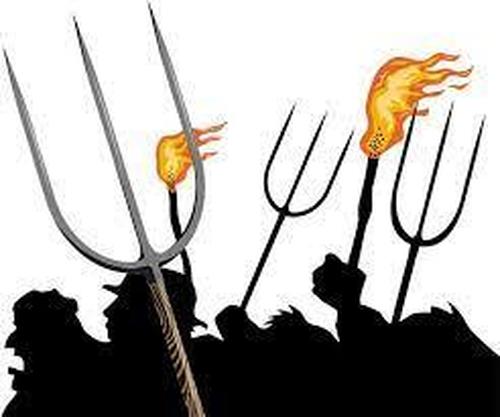 Government intervention discourages production, inflates prices, and, if pushed far enough, leads to empty shelves at the supermarket.  After that, it leads to empty stomachs…and the social chaos that follows.