A lengthy weekend exposé in The New York Post has chronicled how the outgoing de Blasio administration’s long turning a blind eye has allowed the Garment District and some midtown Manhattan streets to increasingly resemble the deteriorating zombie-like feel of the open drug use problem in places like San Francisco, or Vancouver in Canada. It also calls to mind the reputation of an open-air crime infested drug den and “fear city” that came to define daily life and commutes in the 1970s and 1980s – also following more than a year of the Covid-induced exodus of people moving out of the city.

“New York City has become the city of The Walking Dead,” a former NYPD detective, Michael Alcazar, who also teaches at the John Jay College of Criminal Justice, told The Post. The publication quoted neighbors and eyewitnesses who live near 35th and 36th streets, who say that busy sidewalks are now “littered with used needles, broken glass crack pipes, trash, urine, and feces” – and one can increasingly see junkies shooting up in broad daylight. 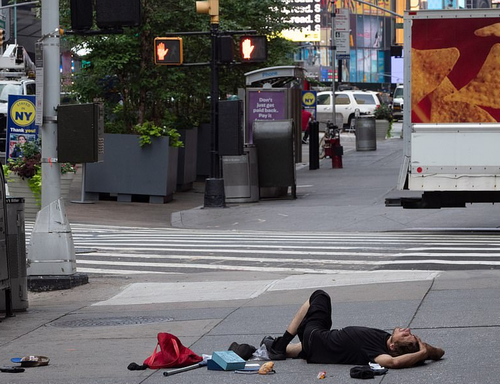 Image source: The Daily Mail
“I’ve personally seen dozens of deals go down. I’ve seen a person OD and nearly die,” one resident of the area said. And separately the aforementioned former detective Alcazar lamented, “This is a city problem. How has the city eroded this far so quickly?” And he concluded, “With lack of treatment and open use of drugs… The city has lost its focus.”

Businesses which form the heart of the neighborhood are all too aware of the downward slide and increasingly public safety danger, with Garment District Alliance President Barbara Blair cited as saying on their behalf, “We are appalled and disgusted by the drug use and other illicit behaviors that are taking place on our sidewalks in Midtown Manhattan and throughout New York City.”

The report actually went so far as to feature photographs of the sordid scenes it was documenting in action: drug deals and exchanges happening with impunity in the middle of the day, shirtless homeless men shooting meth on the sidewalk, police standing around checking their phones as if bored, residents and tourists walking past junkies sitting dazed in a trance-like state of oblivion. 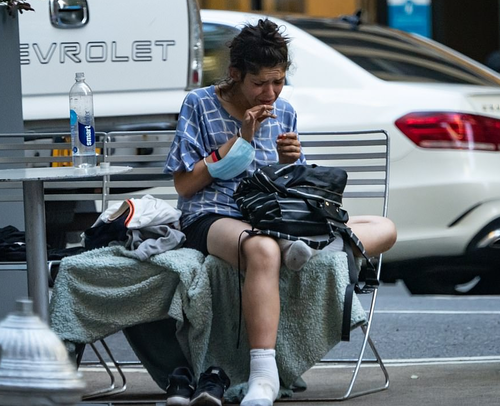 After watching what was an obvious drug deal going down on 36th street the Post reporters crucially observed further:

The NYPD appears to have only a token presence. Two cops stood on Eighth Avenue between 35th and 36th, leaning up against a police van while staring into their phones, as illicit activities swirled around them.

Haven’t seen this in NYC since I was about 6 years old asking my older sister what was wrong with those who were doing this….NYC is now the new Hamsterdam…

'City of the Walking Dead:' Junkies shoot up in broad daylight in Midtown https://t.co/44vAcJLjYe via @nypmetro 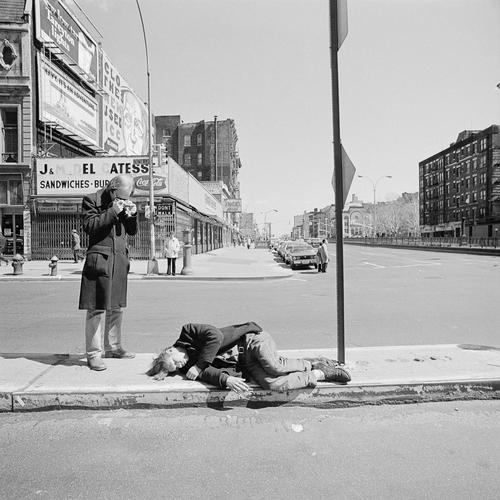 All of this has no doubt impacted violent crime in the area, with the report citing NY city numbers to point out that robberies have jumped a whopping 182% this year compared to last, with felony assaults increasing 163% as well.

This strongly suggests what’s happening on a number of blocks of midtown isn’t merely an inconvenient matter of imaging or a neighborhood aesthetics problem, but will make these neighborhoods increasingly unsafe – not to mention the potential for spread of disease via needles strewn about and a growing feces problem – again akin to San Francisco’s “poop crisis” on the other coast.