Up until now, “the big short” Michael Burry was best known for periodically and inexplicably nuking his twitter account, then promptly restoring it a few days later. We can now add his investment portfolio to the list of things the famous subprime shorter tends to nuke every now and then.

As a reminder, two quarters ago Burry’s 13F caused a stir across trading desks when the “Big Short” revealed a major Tesla put, which with nominal value of $534 million and representing just over 800K underlying shares, was Burry’s largest position in Q1. Also notable was Burry’s aggressive positioning for a surge in inflation (as a reminder, it was Burry back in February warned that Weimar hyperinflation is coming), which as of March 31 he traded as follows:

Another notable, and perhaps uncharacteristic, position was Burry’s substantial bullish bet on FAAMG giants Alphabet and Facebook, where Scion owned a little over $160 million in Call premium, or an equivalent of 80,000 shares of GOOGL and 550,000 shares of FB. 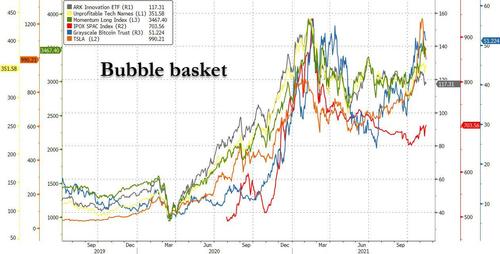 As we reported at the time, as of June 30, Scion owned Puts contracts against 235,500 shares of the ARK Innovation ETF. As everyone knows by now, the flagship exchange-traded fund of Cathie Wood and her firm Ark Investment Management has emerged as the US version of SoftBank, investing billions into anything with a “story”, catching every falling tech knife it can find, and betting for virtually perpetual growth in countless growth and momentum stocks with zero regard for rising inflation. While Wood’s Ark trounced the market in 2020, thanks to her heavy “thematic” investments in tech stocks, Wood and Ark have struggled to maintain their momentum this year, amid concerns about lofty valuations and accelerating inflation. But just as importantly, despite Burry’s aggressive short against Ark, the stock has gone nowhere in the past 6 months, trading in a narrow range between $110 and $130, leading to put-holders’ death by a thousand theta cuts as the stock refused to drop.

Besides Ark and Tesla, Burry added to many of his positions from last quarter, bumping his Facebook Call position by 71%, while also adding modestly to his Alphabet calls.

Altogether, Burry’s portfolio had a nominal value of just over $2 billion as of June 30, but as usual most of this is in the form of call and put value-equivalents;  the actual value at risk for Burry in these names is far lower.

So with that lengthy preamble out of the way, we go to Scion’s just released 13F for the third quarter ended Sept 30, which was most notable for… being almost empty. As shown in the table below, after aggressively building out his portfolio in the last few quarters, including billions notional across calls and puts, Burry appeared to have nuked his portfolio in Q3 when out of 22 total positions (including options) at the end of Q2, the former doctor had just 6 holdings, all long stocks (of course, he may well hold shorts but Burry is best known for leveraging up aggressively by buying calls and puts, both of which he has to report, and this quarter there were none).

Indeed, after unwinding his largest shorts, including his sizable TSLA (which almost certainly lost money), his large ARK ETF Put, and his big TLT Put – as well as his bullish calls on Facebook and Alphabet, Burry had a paltry sive longs in his 13F: CVS Health, GEO Group, Corecivic, which were holdovers from Q2, as well as three new positions in Lockheed Martin, Now, and Scynexis. 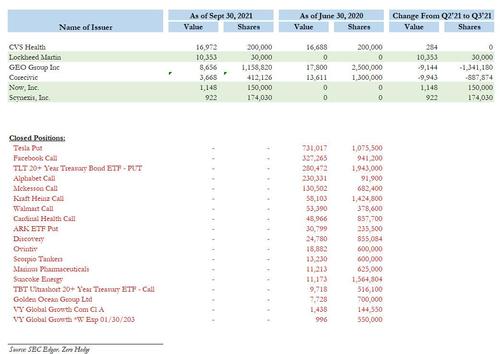 While we don’t know whether any of the positions Scion closed out were profitable, we did already know that Burry closed his Tesla put last month as he told CNBC, noting that the position was just a trade. Ironically, it wasn’t until just the past week that TSLA stocks finally slumped entering a bear market, but it was too late to help Burry who had already closed his position by then.

And since it is unlikely that any of the above bearish bets proved to be extremely lucrative, we can safely say that Burry’s hunt for the next “big short” continues, so far unsuccessfully, and if the recent catastrophic experience from Russell Clark is any indication (as a reminder, the former CIO of Horseman Global just announced he would shutter his bearish hedge fund after being redeemed out of the industry), Burry should probably be careful that he doesn’t follow in Clark’s footsteps…