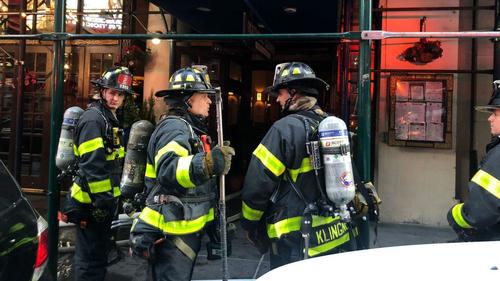 On Saturday, the New York Post reported that 26 New York fire companies have been shuttered citywide due to staff shortages caused by the Covid-19 vaccine mandate.

…an “unconscionable” move some fear could have catastrophic consequences, elected officials told The Post Saturday.

The stunning lockdown came amid a pitched battle between City Hall, which will start enforcing a mandate Monday that all workers have at least one dose of the COVID-19 vaccine — and jab-resisting fire fighters, many reportedly saying they were already sick with the coronavirus and therefore have “natural immunity.” -NY Post

🚨As of 7:30am this morning, 26 @FDNY companies are closed including 5 in my district due to @NYCMayor locking out unvaccinated firefighters.

If someone dies due to a slower emergency response, it’s on Bill de Blasio and his overreaching mandates. I hope this fool fixes it ASAP!

While FDNY Spokesman Jim Long insists that the closings are temporary, and the situation is “fluid,” it’s of no comfort to New Yorkers.

Across the Rockies, Los Angeles Country Sheriff Alex Villanueva has warned of an “imminent threat to public safety” caused by a “mass exodus” of thousands of deputies and civilian personnel who refuse to take the jab.

“I could potentially lose 44% of my workforce in one day,” he wrote in a Thursday open letter to the Board of Supervisors, adding that he can’t enforce “reckless mandates that put public safety at risk,” according to LAist.

The county is currently sending notices to employees who have not yet complied with the vaccination policy that they have 45 days from the date of the notice to register as fully vaccinated, according to a statement from the office of County CEO Fesia Davenport.

After the 45 days have passed, employees who have not demonstrated proof of full vaccination or requested a medical or religious exemption will get a five-day suspension and have 30 days after they return from suspension to come into compliance, the statement said.

The Sheriff’s Department — the largest in the country — employs approximately 18,000 people. About half are sworn deputies.

Meanwhile in Arizona, a Tucson Water employee claims the department is ‘losing staff’ over the mandate.

“We are watching employees walk out as I speak in the water quality and operations division,” reports KOLD13.

“We’re pulling people from other areas and other departments to help specifically cover the operations division which is overseeing the water quality and drinking water parameters,” the whistleblower added.

According to the report, three people have left in the last week alone over the vaccine mandate.

““(We’re) feeling dispensable to our employer that we’ve dedicated our lives to,” the worker said. “In my opinion, it could come to a head where we can’t provide the level of service we were before the mandates.”

While the worker said they’re fearful for the future, they want to reassure Tucsonans the drinking water is safe and they will do everything in their power to make sure it stays that way.

“I drink Tucson water and I care about the quality of it,” the employee said.

We reached out to the city of Tucson about the staff shortage impacting clean drinking water.

“Tucson Water is prepared to continue delivering safe secure clean drinking water,” the city said. “The utility has plans, procedures, practices, and redundancies in place to ensure continuity of operations in the face of reduced staffing and other emergency scenarios.” -KOLD

Now might be a good time to review EM Forster’s 1909 “The Machine Stops” – a cautionary tale of what can happen when a society takes their infrastructure for granted.