Unsurprisingly, Democratic Sen. Joe Manchin is “very uncomfortable” with Biden’s plan – telling CNN‘s Manu Raju: “We want to find how we’re gonna pay for it. … Are we going to be able to be competitive and be able to pay for what we need in the country?”

Asked Joe Manchin about the trillions proposed for Biden’s plans.

"Sure, that makes me very uncomfortable," he told me. "We want to find how we're gonna pay for it. … Are we going to be able to be competitive and be able to pay for what we need in the country?”

President Biden will head to Capitol Hill Wednesday night for the first time since Inauguration Day (a casual visit by the president would risk spoiling the narrative that the Capitol remains a battle-scarred wreck since the Jan. 6 “uprising”) to unveil the second part of his “Build Back Better” plan, a $1.8 trillion proposal to expand the American “safety net” that will be financed by hefty tax increases on individuals and businesses, including a nearly 40% tax on short-term capital gains that spooked the market when it was first reported last week.

The scale of the plan, which has been named “the American Families Plan” and is intended to compliment Biden’s “American Jobs Plan” unveiled four weeks ago, has increased in scope since the first details of a preliminary version were leaked to the press earlier this month.

With spending spanning a decade, the plan’s main features include: $225 billion for child care spending, another $225 billion to create a national family and medical leave program. $200 billion in funding for universal access to pre-K schooling for young children. And $109 billion for two free years of community college, as well as additional subsidies for Americans to purchase health insurance. On the tax credit side, the plan extends a tax credit for up to $3,600 per child until 2025. Biden is scheduled to speak at 2100ET, according to his public calendar. 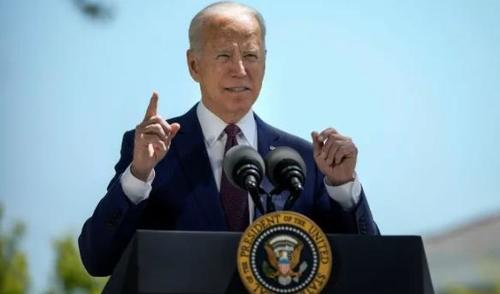 The AFP marks the trillion-dollar-plus installment in Biden’s sweeping economic programs, enabled by the onslaught of the COVID-19 pandemic. First there was the $1.9 trillion, then the nearly $3 trillion American Jobs Plan, and now this. Their ambitious scale means they face an uncertain path through Congress, with Republicans expected to oppose the plan (though it’s possible Biden might win over a few moderates). Planned tax hikes would offset much of the cost of the plan.

According to the FT, senior administration officials have confirmed that the plan would include an increase in the top income tax rate from 37% to 39.6% for Americans earning more than $400,000, eliminate the preferential tax treatment of capital gains and dividends for those earning more than $1 million (so those making a living day trading on Robinhood can relax) and scrap provisions allowing people to pass unrealized capital gains to their heirs tax-free. What’s more, the hike in the cap gains tax will be felt by the private equity industry, since their share of the appreciation in assets they oversee – known as carried interest – is treated as capital gains, and will now be taxed at a much higher rate.

The end result is that much of President Trump’s tax cuts for individuals and businesses will be revered.

“The president’s tax agenda will not only reverse the biggest 2017 tax law giveaways, but reform the tax code so that the wealthy have to play by the same rules as everyone else,” the White House said in a fact sheet accompanying its proposal.

And as we reported yesterday, Biden also intends to hand $80 billion more to the IRS to finance campaigns to track down wealthy tax cheats who move money to tax havens overseas.

Biden has repeatedly insisted that he would try and work with Republicans, and that he might be open to complaints about specific taxes. But if the GOP tries to stymie the plan, Biden has said he would have no problem going it alone.

Since the text of the plan has yet to be released, those interested in a more comprehensive breakdown of its contents should check out the following summary courtesy of Bloomberg:

Biden is calling to raise the top personal income tax rate to 39.6% for those among the highest 1% of earners. “No one making $400,000 per year or less will see their taxes go up,” the White House said in a fact sheet on the plan. Still, the document didn’t specify whether that threshold applies to both single earners as well as married couples.

Biden would increase the capital gains rate to 39.6% from 20% for those earning $1 million or more — 0.3% of taxpayers or roughly half a million households — equalizing that rate with the top marginal income tax rate. A 3.8% Obamacare tax on investment would then be added on top, meaning the richest would pay a 43.4% federal rate on realized investment returns. State taxes could put the combined tax bill north of 50%.

The plan would also end a long-standing capital gains tax break on inheritances known as “step-up in basis,” which allows heirs to use the market value of assets at the time of inheritance rather than the actual purchase price as the cost basis for capital gains when the holdings are sold.

The proposal exempts the first $1 million of gains from the end of stepped-up basis, while there’s no tax if the gains are used for charitable donations. There will also be “protections so that family-owned businesses and farms will not have to pay taxes when given to heirs who continue to run the business.”

The carried interest tax break used by private equity and hedge fund managers to lower their tax bills would be eliminated under Biden’s plan. In what critics call a loophole, that allowed for a share of income being classed as a capital gain, with an associated lower tax rate.

The administration also would eliminate a real estate tax break for when property investors sell one holding for a more expensive one.

The plan calls for increased audits on high-earners that could collect an additional $700 billion in tax revenue, with funding increases for the Internal Revenue Service. Biden is also proposing to require banks to report information on account flows, so that earnings from investments and business profits are reported to the IRS like wages are.

Biden is proposing to extend through 2025 an enhanced version of the child tax credit. The credit, increased for 2021 in the March pandemic-relief package, provides a $3,600 credit for children under six and $3,000 for those six and older. The IRS is slated to send the payments regularly, which amounts to $250 or $300 per child per month, depending on their age. Congressional Democrats are pushing Biden to make this change permanent.

The plan includes $225 billion to help low-income families pay for child care, provide funding to child care providers and boost wages for child care workers to $15 an hour. Biden is also proposing to make permanent a tax credit for child care costs that would reimburse families for care of children 12 and under with a credit worth up to $4,000 for one child or $8,000 for multiple children.

Biden would create a $225 billion national paid family and medical leave program. It would provide partial wage replacement for workers who take time off to care for a newborn or an ill family member, recover from a health issue, deal with a family member’s military deployment, address domestic violence issues or deal with the death of a loved one. The plan guarantees 12 weeks of paid parental, family, and personal leave by year 10 of the program. It provides workers with two-thirds of average wage replacement per month, up to $4,000. Lowest-wage workers will get pay replaced at 80%.

The plan would pump $200 billion into an expansion of tax credits for households that buy health insurance on their own, saving families an average of $50 per person per month. Biden’s outline said nine million people would save hundreds of dollars per year on their premiums, and four million uninsured people will gain coverage.

An expansion of the earned-income tax credit for childless workers who earn wages below the poverty line would be made permanent under Biden’s proposal. The expansion roughly triples the value of the benefit for those individuals, the fact sheet said.

The plan includes $200 billion for free universal pre-school for all three- and four-year-olds. Pre-kindergarten teachers will earn at least $15 per hour, and those with academic qualifications will receive pay comparable to that of kindergarten teachers.

The plan would provide $109 billion to cover two years of tuition-free community college for students and an $85 billion investment in Pell Grants, to aid students pursuing up to a four-year degree. The plan also includes $62 billion to improve college retention rates for disadvantaged students and pump $46 billion into historically black universities, tribal colleges and other institutions that serve minorities.

There is $45 billion to improve the health of school meal programs and provide food for K-12 students during summer breaks in Biden’s proposal.

The proposal earmarks $2 billion to modernize the unemployment insurance system, which has been subjected to fraud and technical challenges during the spike in unemployment caused by the pandemic. Biden didn’t call for an automatic extension of jobless benefits as some Democrats had requested, but he pledged to work with Congress automatically extend benefits based on economic conditions.

The plan did not include any references to expanding the $10,000 state and local tax, or SALT, deduction. More than 20 House Democrats have said that tax break must be boosted to support Biden’s economic agenda. The proposal also didn’t include an expansion of the estate tax — a long-standing Democratic priority that Biden campaigned on. Nor was there an enlargement of Medicare or the drug-price reduction measures that many congressional Democrats have pushed for — though Biden’s outline said both issues were priorities for him.