Just hours after western leaders slapped Russia with unprecedented sanctions the likes of which the world has never seen, including a targeted SWIFT expulsion of key Russia banks as well as an asset and transaction freeze of the Russia central bank, JPMorgan CEO Jamie Dimon explained not only why this harsh escalation may be futile but why it could backfire spectacularly in the years to come.

In an interview with Bloomberg TV, the CEO of the world’s largest bank said that “there are a lot of workarounds for SWIFT, so there are different tools we use for different reasons” adding that “the banks are talking with the government so everyone understands the issues, not because they’re for or against any particular thing.”

While SWIFT sanctions mean companies can’t use the messaging system to do business with the Russian entities affected, they can still do business with them, Dimon said. In fact it’s as simple as sending an email with payment instructions, because what SWIFT really is, is a messaging remnant from a bygone era, before emails, even before the fax machine.

Dimon also said that disconnecting Russian banks from the SWIFT messaging system may bring “unintended consequences” that include third parties finding ways around the penalty.

“What countries do you hurt? What people are going to do workarounds?” Dimon said, referring to “bad players” and others finding workarounds, not his own firm, according to a company spokesperson. Dimon said sanctions, by contrast, are “very targeted, very specific, very clean.”

As Bloomberg reported on Friday, JPMorgan was among Wall Street firms that had counseled Washington against kicking Russia off SWIFT, arguing that it could have far-reaching fallout that could hurt the global economy and undermine the purpose of the penalties.

Dimon’s full interview is below…

… and unlike his brutally wrong bitcoin predictions, Dimon will be right about SWIFT.  In a rhetorical Q&A about the consequences of Russian SWIFT expulsions, Goldman asked whether there is concern this this would undermine the reserve currency status of the Dollar (and Euro) and responded:

The US is in a unique position of having the global reserve currency, which underpins a substantial portion of international trade and foreign exchange transactions, while also granting the Executive fairly broad discretion through IEEPA to restrict US capital flows by invoking security concerns. The widespread use of the Dollar in international markets, for instance, allows the United States to affect foreign policy goals through financial market channels (hard power) and may also confer certain reputational benefits (soft power). However, overuse of these powers could compel other actors to try to replace Dollar transactions, as Russia already did to some extent following earlier sanctions. 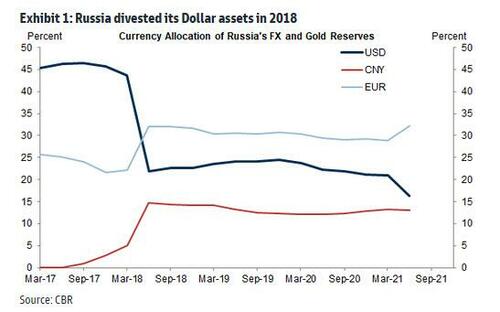 In this regard, the coordination across the G-7 is particularly important. Already, global reserve managers had relatively limited options for shifting reserves out of Dollars given limited supply of strong investment grade assets in the Euro area and limited capital market depth elsewhere. This is especially true for the large reserve managers, like China. But there are also implications for smaller central banks, many of which have used the BIS to facilitate new FX reserves in Chinese securities given the capital constraints, which supports our view that those investments are primarily aimed at diversifying and improving returns. Overall, while these actions could ultimately compel a change in reserve accumulation behavior, and support additional inflows to CNY, there is not really a viable alternative available at the moment for large reserve holders, especially when Europe is also participating in the sanctions.

An even more accurate take comes from the Bloomberg editors who wrote an article this morning explaining why “Wielding SWIFT Against Russian Banks Is a Big Risk” and in which they wrote:

Aside from the immediate collateral damage, excluding Russian banks from SWIFT risks longer-term consequences for international finance. As with any network (think Facebook), the value of SWIFT depends on the number of banks that use it. To that end, the cooperative seeks to encourage the broadest possible participation by maintaining neutrality. Only Iran, which was already isolated financially, has ever been cut off. The example of Russia could prompt others — such as China — to turn to alternatives, fragmenting the payments system and potentially even undermining the U.S. dollar’s dominance as the global reserve currency. One could even imagine a future in which rival nations turned similar financial weapons against the U.S.

Western leaders should be wary of going further and ejecting Russia from SWIFT completely. The effect would be utterly indiscriminate: Supplies of Russian oil, gas and other commodities could collapse, foreign creditors would suffer heavy losses, and even Russians who scorned Putin’s actions and sought to emigrate would have to resort to laundering techniques to get their money out of the country. Putin might well interpret such a cutoff as an act of war and respond accordingly.

As the conflict continues, the international community should work together to coordinate more traditional sanctions aimed at an increasing number of Russian banks, which would impose similarly harsh punishment without such dire unintended consequences — and on measures (such as those already announced) aimed at limiting the Russian central bank’s ability to support targeted institutions. Western nations’ desire to do something big and bold is correct, but they — and the U.S. especially — should be wary of taking actions that they’ll regret.

Whether Putin will interpret the Western expulsion from SWIFT as an acto of war remains to be seen, but one thing is clear: on Monday morning, stocks linked to China’s version of SWIFT – the Cross-Border Inter-Bank Payments System (CIPS) – exploded limit up.

The reason: at least some in the market are betting that the glory days of SWIFT are coming to an end thanks to the West’s own actions, and its replacement is an acronym that very few have heard… for now.

You'll hear a lot more of this acronym this week pic.twitter.com/Bax1PQOcov