The US bond market may be closed, but it was fully open in China, and locals took advantage of this fact to do one thing: sell.

In the aftermath of our viral post “”Catastrophic” Property Sales Mean China’s Worst Case Scenario Is Now In Play“, China property firms bonds were hit with another wrecking ball on Monday as Evergrande was set to miss its third round of (offshore) bond payments in as many weeks and rival Modern Land became the latest scrambling to delay deadlines.

But while Evergrande’s default is now just semantics, and one week after Fantasia shocked bondholders with a surprise announcement it too would stuff creditors just weeks after it had said its liquidity was fine, which sent its bond plunging from par to 74 cents in seconds…

… other signs of stress included smaller rival Modern Land asking investors to push back by three months a $250 million bond payment due on Oct. 25 in part “to avoid any potential payment default.” This was not expected, and Modern Land’s April 2023 bond plunged more than 50% to 30 cents on the day. 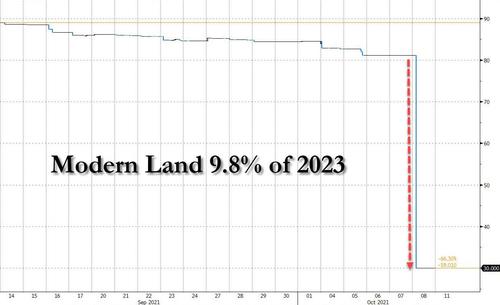 Elsewhere, Xinyuan Real Estate proposed paying just 5% of principal on a note due Oct. 15 and swapping that debt for bonds due 2023. Fitch Ratings called the move a distressed debt exchange while downgrading the firm to C. At least the two companies are relatively small: Modern Land and Xinyuan have $1.35 billion and $760 million of dollar bonds outstanding, respectively, according to data compiled by Bloomberg. In comparison, Evergrande has $19.2 billion.

Kaisa Group, which was the first Chinese property developer to default back in 2015, also saw some of its bonds slump to less than half their face value while supposedly “safe” names such as R&F Properties, and Greenland Holdings, which both have prestige projects in global cities like London, were also widely sold.

Yields on Chinese junk-rated dollar bonds surged 291 basis points to 17.54% last week, the highest level in about a decade, according to a Bloomberg index. 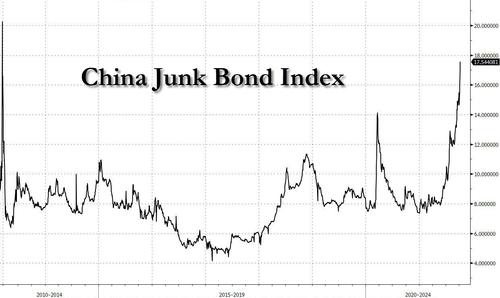 In other words, the dynamic we discussed over the weekend in which we explained why “China’s Worst Case Scenario Is Now In Play” is spreading from the biggest rotten apples – i.e., Evergrande, Fantasia – to collapsing confidence in the property sector, to credits that until now were seen as healthy and immune from a property implosion. In short, the bursting of the US housing bubble has moved to China, and yes – that culminated with the original Lehman moment.

“Evergrande’s contagion risk is now spreading across other issuers and sectors,” JPMorgan’s analysts said, demonstrating a rare talent for observing the obvious.

And while today may have been “disastrous” it could get far, far worse if the market loses faith that Beijing will bail out the bond market.

“We believe policymakers have zero tolerance for systemic risk to emerge and are aiming to maintain a stable property market, and policy support could be forthcoming if the deterioration in property activity levels worsen,” said Goldman head of Asia Credit Kenneth Ho.

Overnight we saw the first sign of such an implicit support in Harbin, the capital of northeastern Heilongjiang province, which became one of the first cities in China to announce measures to support property developers and their projects. According to a report on a website run by Harbin Daily, the city will offer as much as 100,000 yuan home-purchase subsidy to “talents” that meet certain requirements. The city would also make more existing homes eligible for housing provident fund loans to buyers; the moves are aimed at promoting stable and healthy development of the city’s property market, according to the document.

The cash-strapped property developer’s troubles and contagion worries have sent shockwaves across global markets and the firm has already missed payments on dollar bonds, worth a combined $131 million, that were due on Sept. 23 and Sept. 29.

While China’s property sector turmoil has so far been contained to the bond market, tensions amid offshore bonds could soon create headaches for the country’s equity traders, according to Gilbert Wong, head of Asia quantitative research at Morgan Stanley. High-yield credit spreads over comparable Treasuries are the widest on record — at about 1,866 basis points on an option-adjusted basis, data compiled by Bloomberg as of Friday show.  But a measure of stock volatility has actually fallen so far this month. 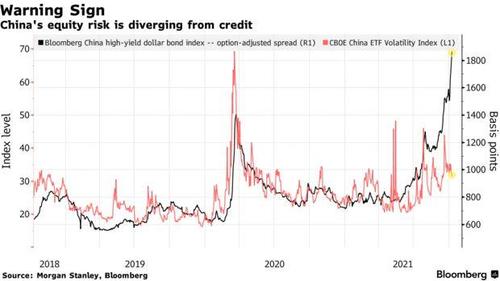 Still, the pair has shown a close relationship in recent years, which suggests their divergence may not last. In the end, a crash in the stock market, where hundreds of millions of Chinese residents are invested, may be just the kick Beijing needs to wake it out of its no bailout stupor.