By Eric Peters, CIO of One River ASset Management

“My massive bias is to believe things always work out okay,” said Simplicity, walking Occam’s Razor. “But today somehow feels unique, and when I look at supply and demand in oil, grains, base metals too, there’s an undeniable tail risk here,” he said, having analyzed the fundamentals of such things over a long career.

“Without a perfect North American growing season, there will be shortages, perhaps we’ll have them even with perfection, it’s too early to be sure.” And Simplicity paused, sharpened by decades of trading markets that oscillate wildly in times of great uncertainty as producers, consumers and speculators struggle to balance supply and demand. “It’s critical to size your positions small enough so that you don’t discover you’re trading a 3-year perspective with a 3-day stop-loss.”

“One thing is certain: To be effective, the Fed will have to inflict more losses on stock and bond investors than it has so far,” said Bill Dudley, former Fed President, saying bluntly what his active-duty central bankers barely dare whisper.

“Market participants expect higher short-term rates to undermine economic growth and force the Fed to reverse course in 2024 and 2025 – but these very expectations are preventing the tightening of financial conditions that would make such an outcome more likely,” explained Dudley, scratching the surface of the disquieting predicament the Federal Reserve now finds itself in.

And because the world’s developed-market central banks adopted US policy in recent decades, the Fed’s quandary is now a global phenomenon. “This would mean hiking the federal funds rate considerably higher than currently anticipated. One way or another, to get inflation under control, the Fed will need to push bond yields high and stock prices lower,” Dudley said.

Cooling an over-heated, capacity-constrained, hyper-financialized economy, in a time of deglobalization and war, without first tightening financial conditions is proving rather difficult. Like all complex problems, this one took decades to create. 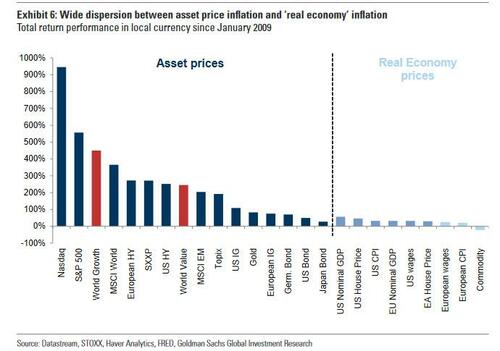 Back when the US economy had less debt and leverage, when financial assets had lower valuations, and when wealth was less concentrated, the ups and downs of the real economy drove financial markets. In such a world, the Fed quite easily used conventional rate policies to influence our behaviors to achieve their objectives.

When those became less effective, they introduced unconventional policies, and forward guided their intentions to become highly predictable. The effect was the hyper-financialization of our economy.

Now, with such high levels of debt, leverage, valuations, and wealth-concentration, it is financial markets that drive the real economy, not the other way around. We have never experienced a modern economic cycle that looks anything like this. And Dudley may be right in his prescription. But if it is one thing, it is certainly not certain.

Rate of Change: “Looking back on the 1970s, you find 3 distinct inflationary cycles,” said the CIO. “Inflation first peaked in 1970 at just over 6%, then backed off,” he continued. “It peaked again in 1975 at around 12%, declined, then made a final push to nearly 15% in 1980.” That was it. “In the first two cycles, equities fell when inflation rose, and rose when inflation fell,” he said. “Then in the third cycle, inflation went up and for some reason equities did too. I don’t know why. But maybe it’s not only about inflation, but also the rate of change of inflation.”

Autarky: “What’s the really fancy word for it?” asked the CIO, annoyed that he couldn’t recall it. I simply shrugged, quite happy to keep it simple. “Anyhow, screw it, it’s some word that refers to nations which strive to become self-sufficient, economically independent,” he said. “There will be a move toward that for the years, decades probably. What the hell is that word?” he asked, sighed. “But the thing is, not every country can become self-sufficient so as much as everyone will want to if they need to, hardly anyone can, and that’ll slow the whole process.”

“This is really driving me nuts,” said the CIO. “But I’m not going to Google it, I’ll remember the word, it’s right there, I can just about touch it,” he said. I had already found it but didn’t want to rob him of the pleasure. “What’s more likely to happen will be a shift toward trade blocks, unions of like-minded nations, partners, allies.” I was tempted to suggest such a world would be bifurcated, but that word is a bit much for me, and besides, I was pretty sure that meant two-worlds, when in fact there could be three or more. “This word is driving me crazy.”

Domo Arigato: “The age of optimization and maximization is over,” said the CIO. “It will be replaced by a resurgence of manufacturing, and Japan is filled with such companies,” he said. “Japanese equities have been penalized for years because they employed inadequate financial engineering.” Now they’re comparatively cheap. “With the weakening Yen, Japan’s minimum wage priced in US dollars is the cheapest in the G-7,” he said. “The percent of Japan’s workforce near the minimum wage is high. And the real exchange rate is back to where it was in 1975.”