Earlier this week, with Fed hawks suddenly dropping like flies following the resignations of Boston and Dallas Fed presidents, Rosengren and Kaplan, amid a public outcry over their recently-revealed daytrading activities which benefited them as a direct result of monetary policy decisions they were explicitly and directly involved in, we joked that if the Fed wants to get rid of all the hawks, they just need to leak the trading records of Kansas City Fed president Esther George, widely viewed as the most vocal hawk among all FOMC members.

If the Fed wants to get rid of all the hawks, they just need to leak Esther George's etrade blotter

Well, it may not be George (yet) but overnight the government ethics office published forms which showed that none other than the (centrist) Fed Vice Chair Richard Clarida may be the next to “retire” (perhaps he too is on a kidney transplant list) following the revelation that he was trading in and out of millions in securities on February 27, 2020 just one day before Fed Chair Powell issued an (extremely bullish) emergency statement hinting at possible policy action as the pandemic worsened.

According to the disclosure, just as markets were starting to freak out about the Covid pandemic, Clarida shifted anywhere between $1 and $5 million out of a Pimco bond fund (the Pimco Income Fund PIMIX) on Feb. 27, 2020, and on the same day buying between $1 and $5 million of the Pimco StocksPlus Fund (PSTKX) and the iShares MSCI USA Min Vol Factor exchange-traded fund (USMV). Aside from these three trades, Clarida had a grand total of two more trades in 2020, the sale of $500K-$1MM of the Shwab SCHK ETF on August 3 and another purchase of the USMV ETF to the tune of $250K-$500K.

Why does this matter? Because his trades took place just a day before Powell issued an emergency statement on Feb 28 at 2:30pm with which he sought to reassure suddenly panicking markets that the Fed has their back (something he would amply demonstrate a few weeks later when the Fed nationalized the corporate bond market). Specifically, Powell said that the virus poses “evolving risks to economic activity” adding that the Fed was “closely monitoring developments and their implications for the economic outlook.”

The fundamentals of the U.S. economy remain strong. However, the coronavirus poses evolving risks to economic activity. The Federal Reserve is closely monitoring developments and their implications for the economic outlook. We will use our tools and act as appropriate to support the economy.

As shown in the chart below, following the chart drop in the days prior, Powell’s clearly market-moving statement served to spike the market by over 100 points in minutes. 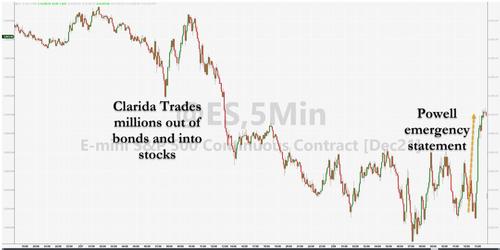 Just a few days later, on March 3, with stocks crashing, the Fed launched the first of many emergency market bailout operations that would double the S&P from its March 2020 lows, including trillions in QE, repo and reverse repo operations. Everyone knows what happened after. 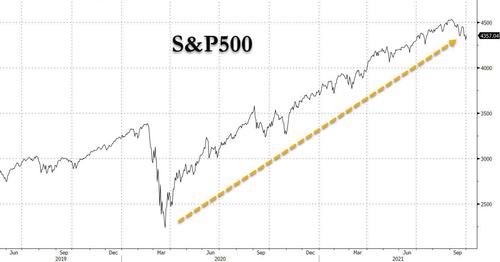 When contacted by Bloomberg, a Fed spokesman for the vice chair said that “Vice Chair Clarida’s financial disclosure for 2020 shows transactions that represent a pre-planned rebalancing to his accounts,” adding that “The transactions were executed prior to his involvement in deliberations on Federal Reserve actions to respond to the emergence of the coronavirus and not during a blackout period. The selected funds were chosen with the prior approval of the Board’s ethics official.”

Of course they were… just like the Dallas Fed was perfectly fine with Kaplan’s “tens of millions” in stock trades in a year when the Fed’s policies injected trillions to the balance sheet until he was busted and an epic scandal followed… just like “daytrader” Rosengren suddenly deciding to retire for “health reasons.”

Adding to the shadiness, Bloomberg notes that Clarida – who is a former PIMCO executive, if not one blasting the theme song to Gilligan’s Island in his back yard – was visiting faculty and students at Yale University the day of the trading, and not in his office in Washington. Furthermore, his calendar for the month shows a single phone call with a Board member on Feb. 27 at 4:45 p.m. after the market close, as well as numerous meetings with Fed staff on prior days. No calls to either PIMCO or a brokerage are disclosed.

What makes Clarida’s trading transgressions even worse, is that the Fed can’t punt them on the flawed policy book of some regional Fed – these come from the Marriner Eccles building itself. The Fed spells out clear guidelines for trading activity by policy makers. Its Voluntary Guide to Conduct for Senior Officials says “they should carefully avoid engaging in any financial transaction the timing of which could create the appearance of acting on inside information concerning Federal Reserve deliberations and actions.” It also says that they should avoid dealings that might “convey even an appearance of conflict between their personal interests, the interests of the system, and the public interest.”

And yet, casting even more doubt on the Fed’s integrity, ethics and especially capacity to think clearly, even the Vice Chair failed to realize that buying millions in stock ahead of a greatly market moving decision had all the “appearance” of massive insider trading.

It goes without saying, that February 2020 was a time of extreme moves in financial markets as investors (belatedly) panicked to the threat of the global spread of Covid-19. Stocks plunged and bond markets were in a powerful rally. Stocks would then continue to fall until March 23 when the Fed unleashed the monetary nukes, injecting trillions in the market and started buying corporate bonds to avoid a systemic crash, thereby nationalizing the bond market.

“The pandemic was spreading quickly and the economic outlook was evolving rapidly. That was not the appropriate time for top Fed officials to be making multi-million dollar changes to their portfolios,” Andrew Levin, a Dartmouth College professor and former special advisor to the Fed’s Board pointed out what should have been patently obvious to all, except entitled Fed Vice Chairs who are somehow exempt from the rules that apply to peasants. He added that “the Fed should welcome an external review of all financial transactions made by Federal Reserve Board members last year.” One wonders if the entire FOMC will be forced to retire “for health reasons” immediately after.

And while we wait, it’s probably safe to say that Clarida will be drafting his resignation in the coming days, which means that with two hawks down, the Fed is about to have another vacancy, this time to replace its centrist vice chair.

And while we urge readers to go over Clarida’s entire asset and income statement (link), we can’t help but note two things: i) according to the Vice Chair, cash is anything but trash with millions spread between bank and money market accounts, and ii) judging by the aggressive diversification of his bank account holdings, the Fed Vice Chair is hardly confident about the stability of the US banking system. 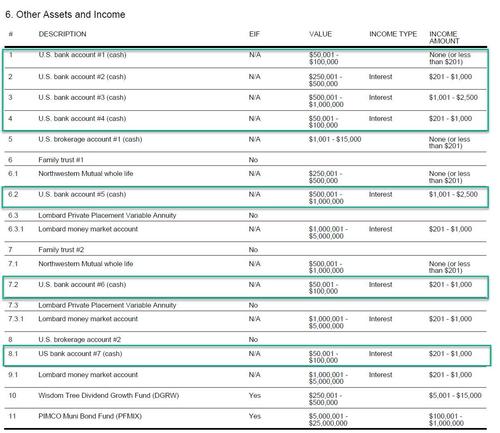