While the market has clearly moved on from the Evergrande debacle, perhaps assuming that all is now contained while completely ignoring the potentially catastrophic consequences for China’s US$60 trillion property market (Goldman has just come out with a must read report “Investing under a new regulation regime (Part 4): A US$60tn property dilemma” available to pro subs in the usual place), the reality is that the company is about to default on some $18 billion in foreign debt.

… Reuters reports that there is still no news, and – worse – Group’s dollar (offshore) bondholders were still waiting for information about a key interest payment due Thursday, “with some holders having given up hope of getting a coupon payment by the deadline, a source familiar with the matter said.” Adding insult to injury, as of midnight Hong Kong time, there had been no announcements by Evergrande about the payment, confirming that the company will simply pretend it never had to make a payment.

And while the source added that the property developer was “instead expected to provide more information in the coming month”, that’s not how bondholder indentures work and unless there is a resolution in the next few hours, Evergrande will enter it 30 day grace period while rating agencies S&P and Moody’s will declare in Selective Default, i.e., a state were a borrower fails to pay one or more of their obligations but continues to meet other payment obligations. Semantics aside, a selective default is a default for the affected bondholder group, which in Evergrande’s case includes over $18 billion in dollar-denominated bonds.

While Evergrande negotiated a resolution on its local interest payment due today, it was also due to pay $83.5 million in interest on a $2 billion offshore bond on Thursday and also has a $47.5 million dollar-bond interest payment next week. So far it has not made the payment and looks unlikely to make it.

Both bonds would default if the company, which has outstanding debt of $305 billion, fails to settle the interest within 30 days of the scheduled payment dates.

The company has yet to make an announcement about its plans for Thursday’s offshore bond coupon payment and a company spokesperson did not respond to requests for comment.

The silence from Evergrande flies in the face of an earlier report from Bloomberg according to which Chinese regulators had asked Evergrande executives to avoid a near-term default on its dollar bonds and to communicate proactively with bondholders. It appears that report was false.

“They don’t want a default right now,” said Connor Yuan, the head of emerging market flow credit trading for Asia at Goldman Sachs. “Given there is a 30-day grace period, I think today it’s very likely the coupon won’t be made but it is possible that they try to get a deal done in the next 30 days.”

Meanwhile, conflicting with the Bloomberg report, the Wall Street Journal reported separately on Thursday that Chinese authorities were asking local governments to “prepare for the demise” of Evergrande. The WSJ said local governments had been “ordered to assemble groups of accountants and legal experts to examine the finances around Evergrande’s operations in their respective regions.” They have also been ordered to talk to local state-owned and private property developers to prepare to take over projects and set up law-enforcement teams to monitor public anger and “mass incidents”, a euphemism for rioting.

Looking ahead, there are two camps: one is populated by pessimists like Jim Chanos who warned that an Evergrande default would be worse than Lehman due to the downstream shock this event would have on China’s $60 trillion property market. Earlier today, the Swiss central bank said Evergrande should not be dismissed as a small, local problem. In the other camp we have optimists like Jean-Yves Fillion, chief executive officer of BNP Paribas, who told CNBC that “Evergrande is a serious situation but we see it as quite contained both in terms of the sector, mainly Chinese real estate, and mostly Chinese counterparties. Historically we have seen the Chinese administration taking care of these type of situations and resolving them. The linkages between the Evergrande situation and the strong U.S. equity market we see as not very significant.”

We’ll see if that’s true but for now, it appears that our prediction that “Beijing will pay local bondholders and soft nationalize Evergrande, but will avoid allegations of backsliding on tightening/deleveraging promises and and “common prosperity” by stuffing foreign creditors” will be proven accurate.

Brilliant: Beijing will pay local bondholders and soft nationalize Evergrande, but will avoid allegations of backsliding on tightening/deleveraging promises and and "common prosperity" by stuffing foreign creditors.

Meanwhile, over in China, Evergrande Chairman Hui Ka Yan – who just a few years ago was China’s second richest man behind Jack Ma – did not make any mention of foreign creditors, but instead urged his executives late on Wednesday to ensure the delivery of quality properties and the redemption of its wealth management products, which are held by millions of retail investors in China. 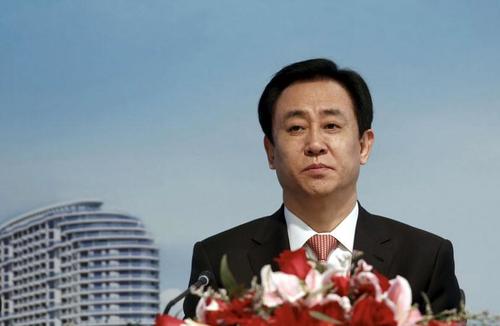 In other words, it seems that a default on foreign bonds has already taken place.

Some analysts say it could take weeks for investors to have any clarity about how the Evergrande situation will resolve.

“The company could restructure its debts but continue in operation, or it could liquidate,” wrote Paul Christopher, head of global market strategy at Wells Fargo Investment Institute. In either case, investors in the company’s financial instruments would likely suffer some losses, he wrote, adding that “in the event of a liquidation, however, Chinese and global investors could decide that the contagion could spread beyond China”

But the elephant in the room is not the write down of a modest $18 billion in foreign bonds to the likes of Blackrock, for whom this is a peanuts. The real question is how an Evergrande failure would impact confidence in China’s property sector and whether it will lead to a sharp drop in what has traditionally been the world’s most valuable asset, one which represents some 70% of China’s urban household net worth.

At an eerily quiet construction site in eastern China, worker Li Hongjun said Evergrande’s crisis meant he will soon run out of food while Christina Xie, who works in the southern city of Shenzhen, feared Evergrande had swallowed her savings.

“It’s all my savings. I was planning to use it for me and my partner’s old age,” said Xie. “Evergrande is one of China’s biggest real estate companies … my consultant told me the product was guaranteed.”