Remember way back in April 2013 when Elon Musk vowed at the Tesla annual shareholders meeting that “just as my money was the first in, it will be the last out.” No? Good, because fast forwarding to Tuesday night, we learned that Musk just took 6.9 billion steps to be among the first to get the hell out of Dodge.

Forgot to say one thing at Tesla annual shareholders meeting: just as my money was the first in, it will be the last out.

According to four Form 4 filings filed late on Tuesday night, Elon Musk sold a total of 7.92 billion (or $6.9 billion) of shares in Tesla, the first time he has sold stock in the carmaker since April, when he was allegedly selling TSLA shares to help him “fund” the Twitter acquisition… for which he dropped his bid shortly after, almost as if the TWTR deal was just a pretext.

According to the new filings, Musk dumped the shares on Aug. 5, the day when TSLA stocks tumbled some 8%. 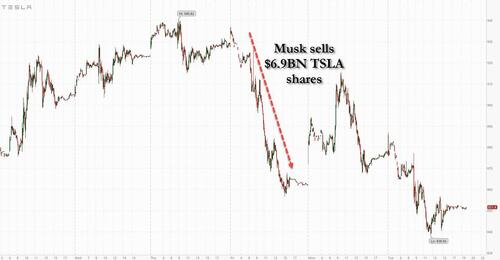 The sale took place shortly after Musk’s latest taunt to shorts, who it appears were right – judging by Musk’s own sale – but were squeezed nonetheless.

With the latest sale, Musk has now sold around $32 billion worth of TSLA stock in the past 10 months.

Tesla’s stock slumped late last year as Musk offloaded more than $16 billion worth of shares, his first sales in more than five years. The disposals started in November after Musk polled Twitter users on whether he should trim his stake.

The shares have risen about 35% from its recent lows in May. Some have noted how every time Musk dumps a boatload of stock, an unexplained gamma squeeze kicks in just before the sale, affording Musk a far higher sale price.

It is surely also a coincidence, that just as Musk was about to dump his shares, a massive burst of retail buying emerged in recent weeks, which it is safe to say, spilled over into meme stonks and forced the latest WallStreetBets short squeeze. As a reminder, last Wednesday we wrote that “Explosion In Retail Buying Revealed As Source Of Latest Tesla Stock Surge.” Perhaps some regulator will finally look into this. 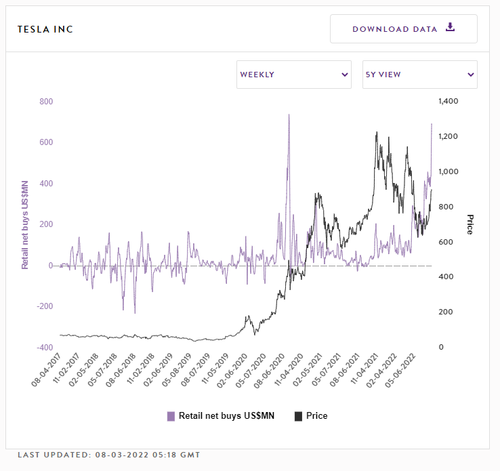 Of course, there is a less sinister explanation: Musk and Twitter have reached a settlement agreement, and Musk was quietly prefunding the balance of his purchase commitments, which means that Twitter employees are about to have a very unpleasant night. Then again, if not one can add this latest Tesla mega-dump to the long list of bizarre events Musk will have to explain in court in a few months…