COVID-19 metrics in southern states like Florida have plummeted in recent weeks while rising in many northern states, including heavily vaccinated ones. 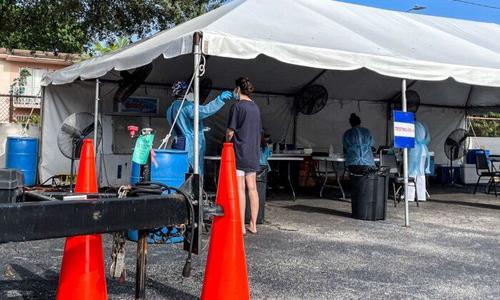 Similar drops have been recorded in Alabama, Arkansas, Georgia, Florida, and Texas.

At the same time, metrics have been rising in many northern states, including those in New England.

Vermont, for instance, went from one case on July 5 to 286 on Oct. 1, and eight hospitalizations in the month of June to 160 in the month of September, though the metrics have been declining in recent days.

Experts say the shift is part of a seasonal pattern for Covid-19.

Last year, cases started dropping in the south at the same time they climbed in much of the upper Midwest and other northern areas. The same pattern is playing out again, Dr. Scott Atlas, who advised former President Donald Trump and is now a senior fellow in health care policy at the Hoover Institution, told The Epoch Times.

“We’ve seen some kind of seasonality, or really cycles where we have seen these surges,” Dr. Adnan Munkarah, executive vice president and chief clinical officer for the Henry Ford Health System in Michigan, added during a briefing this week. Active cases and hospitalizations have risen 97 percent and 96 percent, respectively, in the state since hitting lows in early July.

Experts aren’t sure what’s driving the pattern. Ideas include differences in humidity and differences in temperature, which may lead more people to spend longer portions of time indoors. The virus spreads much more easily in crowded indoor spaces.

Another key factor, many experts say, is protection populations have against the virus. Protection can come from vaccination or prior infection, also known as natural immunity. Both do well against severe disease but protection from infection has been waning among the vaccinated, dropping by half for Pfizer’s shot after five months, according to one recent study.

The decline in cases “is likely due to a decrease in spread of the Delta variant due to a combination of an increasing proportion of the population that is vaccinated and an increasing proportion of the population that has gained temporary immunity because they have been infected and survived COVID-19,” Danyelle McNeill, public information officer for the Arkansas Department of Health, told The Epoch Times in an email.

Some people thought the rising number of people with immunity would prevent another set of waves, or sharp increases in COVID-19 cases, hospitalizations, and deaths, but that proved inaccurate. Multiple states have seen numbers similar to or even higher than previous peaks.

“We thought we were out of the woods,” Dr. Michael Saag, professor of medicine at the University of Alabama at Birmingham’s Division of Infectious Diseases, told The Epoch Times. “The end of June seemed like everything was settling down. And then July 4 weekend hit, and that was coincident with Delta really exploding, and throughout July, and especially August, all hell broke loose.”

New cases peaked in Alabama on Aug. 15. They’ve since dropped 70 percent. Hospitalizations peaked around the same time. They’ve decreased about 62 percent as of Oct. 8.

Nationwide, both cases and hospitalizations have dropped since hitting peaks in late August and early September. 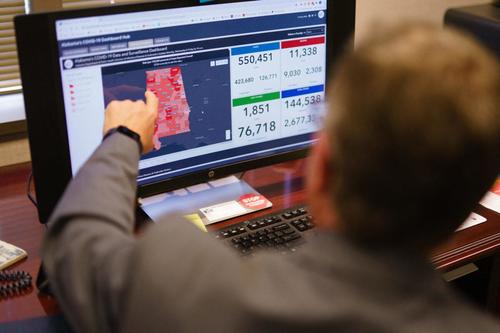 Scientists are becoming more aware that the CCP virus is different than any other virus.

The epidemic “is almost impossible to predict,” Saag said. “I’ve been humbled tremendously about this epidemic in terms of having no ability to predict, really, what to expect,” he added.

“I would not be telling the truth if I told you I knew,” Dr. Scott Harris, Alabama’s state health officer, said during his weekly update on Friday when asked why cases in the state have gone down so quickly.

Federal health officials and modelers have consistently been wrong with predictions, including models that vastly overestimated how many people would need hospital care last year.

“Things have changed. We didn’t know things early on,” Dr. Anthony Fauci, the director of the National Institute of Allergy and Infectious Diseases, said during a recent appearance on Hugh Hewitt’s radio show.

One problem stems from counting hospitalizations, Atlas noted. Approximately half of COVID-19 hospitalizations may have been admitted “for another reason entirely,” researchers said last month. That’s a major issue when counting child hospitalizations. Many of the children have respiratory syncytial virus, which is more dangerous to young kids than COVID-19.

Governors in many states imposed harsh restrictions last year when the pandemic first started. Others have continued issuing orders, including mask mandates.

“The escalation of cases is particularly concentrated in states with low vaccination rates. Just two states, Florida and Texas, account for one-third of all new COVID-19 cases in the entire country. Just two states,” Biden told a press conference in August. At a separate briefing, he said masks and vaccines are the two best ways to protect against COVID-19 and alleged governors trying to forbid mask mandates for schools were “setting a dangerous tone.”

But the governors pushed back, and an increasing number of officials say the effectiveness of the mandates is unclear.

“The data and the science doesn’t back up” more restrictive measures, Vermont Gov. Phil Scott, a Republican, told reporters this week. “For instance, I think there’s seven states across the country that still have a state of emergency and math mandates. Their data doesn’t look any different than ours. In fact, it’s worse than ours. So their mitigation measures haven’t worked. And you see this time and time again.”

Officials in Vermont are encouraging mask wearing in certain conditions and urging everybody to get vaccinated but have avoided mask and vaccine mandates.

Vermont has the lowest COVID-19 deaths per 100,000 residents, according to an age adjustment of mortality data reported to the federal government. Hawaii, which has imposed some of the strictest measures anywhere in the world, is second.

“We’ve made decisions based on the disease burden in our community, daily new case counts, test positivity rates, resource capacity such as health care staffing, emergency department capacity, oxygen, and the number of available hospital bed and ICU units. And we’ve been successful,” Hawaii Gov. David Ige, a Democrat, told a press conference on Friday.

Even after the recent spike in Florida, which saw its highest hospitalization totals during the pandemic, the state is 27th.

DeSantis prioritized early treatment of COVID-19, primarily through monoclonal antibodies, a drug shown in studies to prevent hospitalizations, as well as vaccinating the elderly.

“There is a lot we still don’t know about COVID-19. However, it is clear from the past 18 months that cases rise and fall in certain regions at different times of year, regardless of whether governments impose restrictions like lockdowns and mask mandates,” Pushaw said. 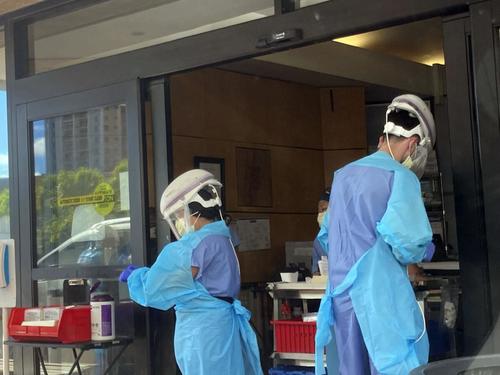 Experts believe higher vaccination rates will help protect against future waves, especially among people who don’t have antibodies from recovering from COVID-19.

“We should try to make sure that everybody who is old who hasn’t had COVID gets vaccinated,” Dr. Martin Kulldorff, professor of medicine at Harvard Medical School and a senior scholar at the Brownstone Institute for Social and Economic Research who has advised DeSantis, told The Epoch Times.

“We have a series or group of incredibly effective vaccines if we can only get people to roll up their sleeves and get it,” Saag said.

While the number of vaccinated Americans getting infected, hospitalized, and dying continues to rise, data from states across the country do not track prior immunity, though patients are often asked if they have had COVID-19 when being admitted to hospitals. A series of studies have shown that people who recover from COVID-19 are at little risk of re-infection.