Only two things in life are certain – death and taxes, and the IRS can take care of both.

As the agency prepares to add 87,000 new positions over 10 years, pending the passage of the Inflation Reduction Act that will give the agency $80 billion (half of which will be earmarked to help crack down on tax evasion), an online job posting for “Criminal Investigation Special Agents” has sparked outrage over a “key requirement” that applicants be “legally allowed to carry a firearm.”

“Major duties” of the job include “Carry a firearm and be willing to use deadly force, if necessary,” and “Be willing and able to participate in arrests, execution of search warrants, and other dangerous assignments.”

While Democrats say the IRS’s enhanced collections will raise an additional $124 billion in federal revenue from tax cheats over the next decade, Republicans warn that an army of IRS agents will do nothing but harass small business owners and lower-income workers. According to an analysis by House Republicans, Americans earning less than 75,000 per year will receive 60% of the additional tax audits.

The analysis, which is a conservative estimate based upon recent audit rates and tax filing data, shows that individuals with an annual income of $75,000 or less would be subject to 710,863 additional IRS audits, while those making more than $1 million would receive 52,295 more audits under the bill.

Overall, the IRS would conduct more than 1.2 million more annual audits of Americans’ tax returns, according to the analysis. Another 236,685 of the estimated additional audits would target individuals with an annual income between $75,000 and $200,000.

Democrats insist Americans making less than $400,000 will not be targeted by agents hired due to the spending bill. -NY Post

In a related piece of legislation reported by the Epoch Times, Rep. Matt Gaetz (R-FL) introduced a bill last month which would bar the IRS from acquiring ammunition. Known as the “Disarm the IRS Act,” the bill (pdf) stipulates that the IRS is “prohibited from acquiring ammunition” and “notwithstanding any other provision of law.” Reps. Marjorie Taylor Green (R-Ga.), Paul Gosar (R-Ariz.), and Jeff Duncan (R-S.C.) are co-sponsors of the measure, according to his office. 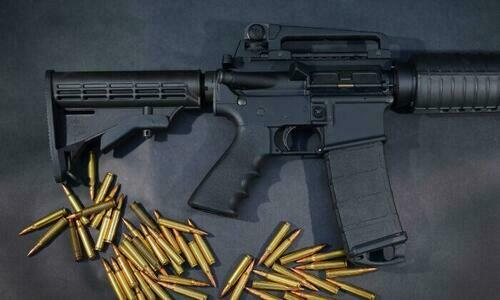 It came after Gaetz, in interviews with Fox News and other outlets, expressed concern after he discovered that the IRS purchased more than $700,000 in ammunition over a span of several days days. The congressman suggested that it’s part of a broader White House plan to disarm Americans.

“Here’s the Biden plan: Disarm Americans, open the border, empty the prisons–but rest assured, they’ll still collect your taxes, and they need $725,000 worth of ammunition, apparently, to get the job done,” he told Fox News last week.

The bill, he said, would put a “total moratorium on the IRS buying ammo. When we used to talk about the IRS being weaponized, we were talking about political discrimination, not actual weapons for the IRS.”

“Undeniably, part of the strategy is that with one hand, the Biden regime is doing everything they can to suppress access to ammunition for regular Americans, while with the other hand, they are scooping up all the ammo that they can possibly find,” Gaetz alleged.

According to a report released by the Government Accountability Office in 2018, the IRS has been stockpiling ammunition and weapons for years. As of 2018, the agency had 4,487 firearms and 5,062,006 rounds of ammunition in its inventory, the report said.

A 2018 report from Forbes noted that the IRS buys guns and ammunition for its Criminal Investigation Division. Agents in that division are the only employees in the IRS that carry firearms, according to its website.