Update (1708ET): Rep. Ilhan Omar also pretended to be in handcuffs – and can be seen raising her right arm at the very end of the clip.

What’s more, her staff lied to reporter Esme Murphy and said she was handcuffed. Watch:

Her staff is lying unless she's Superman and just broke the handcuffs at the end of the video. pic.twitter.com/BrToWoVsg9

Update: US Capitol Police said in a statement that they made “a total of 34 arrests for Crowding, Obstructing or Incommoding,” which included “16 members of Congress.”

Rep. Alexandria Ocasio-Cortez appeared to pretend she was handcuffed on Tuesday as police escorted the Democratic socialist and several other lawmakers from a protest outside the Supreme Court. 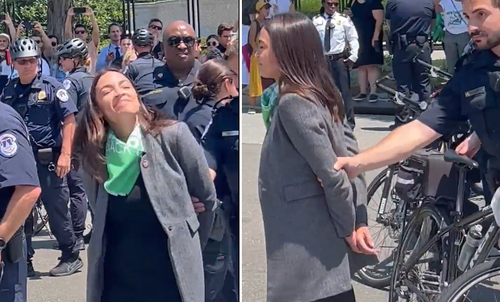 As the Daily Mail notes, “Ocasio-Cortez was seen walking escorted away by police with her hands crossed behind her back, as if she were in handcuffs, but she was not. At one point she uncrossed her hands and raised her fists to the other protesters.”

AOC and the other lawmakers joined pro-abortion protesters who have gathered outside the Supreme Court almost daily since Roe v. Wade was overturned in June.

“I’ve just been arrested at the Supreme Court protesting the horrendous overturn of Roe v Wade. This is the time to stand up, speak out, and not shy away when seeking justice and equality,” tweeted Rep. Maloney after what she called an ‘arrest.’